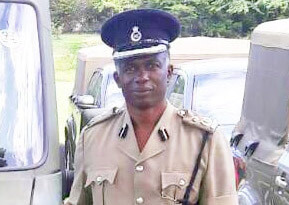 Retired Assistant Commissioner of Police (ACP), Trevor Modeste believes that the police on the sister isle of Carriacou should take some of the blame for the violent and bloody incident which took place there on Tuesday and left two persons receiving medical care for injuries.

Modeste told THE NEW TODAY that he is aware of several complaints made by Slim Mathurine and his Bajan-born wife, Linda against his former wife Maureen Scott and some of the seven children she bore for him in a previous marriage.

Police were called in after Linda telephoned the station to inform them that Ken Maturine, Slim’s son with his first wife had badly beaten the father and that a dog was also let loose to bite him up.

Although the two were divorced for years, they are living next door to each other in Top Hill and are often involved in family conflicts.

Tuesday’s incident was allegedly sparked by an intrusion of Maureen to clear vine on a fence erected by Slim to keep the families apart.

According to ACP Modeste, he is aware of the several complaints from Slim and Linda to the police in Carriacou about Maureen and some of her children, which were never dealt with in a serious manner.

“The wife (Linda) called me when I was in the hospital and on pre-retirement reporting those incidents – you can put my name on that,” he told THE NEW TODAY.

The current Member of Parliament for Carriacou & Petite Martinique and Minister of Legal Affairs, Kindra Maturine-Stewart is the daughter of Slim in his previous marriage with Maureen.

ACP Modeste said he was not surprised at the bloody turn of events on Tuesday which is now being investigated by the police.

“I know that was going to happen – they (Slim and Linda) have been ostracised,” he added.

The former top cop claimed that the police did nothing serious about the many complaints made against the mother of the current MP except “to go and talk” to the so-called aggressors.

Modeste also said that he knew for a fact that the senior government minister who is Slim’s daughter used to live at Linda’s home in Barbados when she was studying law at the Cave Hill Campus of the University of the West Indies.

The badly beaten father told THE NEW TODAY early Wednesday that he was due to meet with the police sometime in the day to bring in a medical report on his injuries and will press for charges to be laid against his son over the incident.

Although Maureen Scott who is at the centre of the controversy has not made any public statement on the issue, a brief message was sent out by someone associated with her.

It reads as follows: “There is a fence that separate the both of them. There is some wild vines growing on the fence, this morning (Tuesday) Maureen went on his side and root out the vine. Slim was angry that she was on his side rooting out the vines.

“She apologised to him. She told him that it’s the wild vine and she did not think it would be a problem but she is very sorry. Slim went to funeral. When he got back from the funeral Slim and his wife Linda went to Maureen yard both with cutlass and start cussing.

“Ken said to Slim, my mother apologised to you this morning, she said that she was sorry, what else do you want from my mother. Linda then cut Ken with her cutlass, Ken received 16 stitches. They then called Kendrick and a fight broke out”.

A resident in Carriacou who is familiar with both families said it is now apparent that “the police gave them (Maureen and Family) enough time to make a story (as) they had all night.”

When contacted Slim and Linda Maturine brushed aside the statement as false.