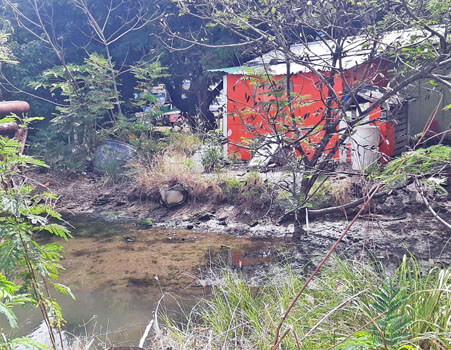 The section of the Lagoon which is now an eyesore

A top professional on the island has called on the Keith Mitchell-led New National Party (NNP) government to address a serious Sanitation problem on the Lagoon especially the presence of feces in an area opposite Bryden & Minors.

In an interview with THE NEW TODAY, the individual said that for several years a number of concerned persons have been trying to get the feces issue on the Lagoon cleaned up but without any success. “The Ministry of Health is doing nothing – we have written them multiple times,” he said.

According to the professional, over the years an increasing number of persons have been putting up little shacks on a plot of land and using the waterway there as their toilet. He said that a number of Business people in the area are now crying out for help over the situation with the feces.

The professional indicated that the owners of the property, Camper Nicholson had expressed a willingness to put up the finance to help the authorities get rid of the sanitation problem along the Lagoon since it has become “a crisis”.

“This thing is getting filthy now,” he said, adding that a plan has already been drawn up “to get all forces together to clean that Lagoon Road – we have to.”

The professional stated that those persons who have taken up illegal residence on the small plot of land are simply doing their “nastiness in the water” as they have nowhere else to put down their human waste. “These people have to come off that plot of land,” he said.

THE NEW TODAY understands that one of the ideas being mooted is to develop the area into “a green space” for the benefit of all Grenadians including the establishment of a playground for children, as well as a park for natives to relax.

However, the professional said that the NNP government of Dr. Mitchell needs to step in and tackle the deteriorating sanitation problems on that section of the Lagoon.

A leading businessman in the city complained that recently he was swimming in the waters on Grand Anse beach and saw feces circling around him.