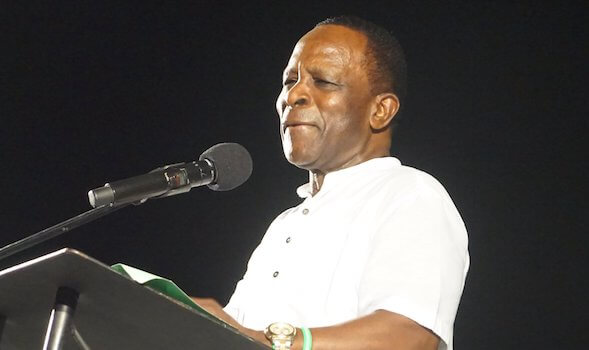 The Family members of late Prime Minister and main Founder of the National Democratic Congress (NDC), George Ignatius Brizan is making a public appeal to current Prime Minister Dr. Keith Mitchell to refrain from using his good name on the platform of the New National Party (NNP) in the current election campaign.

The Brizan family is deeply offended and upset by the frequent calling of his name by Prime Minister Mitchell to criticise the new leaders of the Congress party.

The Brizans’ are supportive of the NDC Team, led by the current Political Leader Dickon Mitchell and their advocacy for Agro-processing which was something that was always championed by the late George Brizan to help with the development of the Tri-island State of Grenada, Carriacou & Petite Martinique.

The widow of the late Prime Minister and NDC Founder, Mrs. Jean Brizan accepted and participated in a recent function hosted by Mr. Dickon Mitchell in which he recognised the Elders of the party.

The Family is now shocked at the attempt by the Prime Minister to drag George Brizan into the 2022 election campaign after vilifying his name over the years with the successful Structural Adjustment Programme that the 1990-95 NDC Government was forced to implement due to reckless borrowing and spending of the 1984-90 NNP Government in which Dr. Mitchell served as Minister of Works.

The current Prime Minister stated falsely that the 1990-95 NDC government involving George Brizan had set back the country for 15 years while the International Monetary Fund (IMF) praised the administration for its successful execution of the Structural Adjustment Programme which secured over 100 million dollars which Dr. Mitchell inherited following his victory at the polls in June 1995.

Can Dr. Mitchell refute the following that was pronounced by the IMF on the handling of the economy by the NDC government of Sir Nicholas Brathwaite and George Brizan:

“Grenada’s three (3) year “homemade” Structural Adjustment Program was an unqualified success. Grenada received over $100 M in concessionary aid and a restoration of credit worthiness, which was lost in 1990.

“The Government should be congratulated for the economic progress and for enhancing the country’s credit worthiness”.

In 1992 and 1993, the Government took some difficult policy decisions and succeeded in establishing a track record of sound economic management as discussed two years ago. In light of the progress achieved during the past two years and its proposed program for the next three years, Grenada will again be eligible to receive IDA/WB lending through C.D.B vie and various regional projects under preparation.

The restoration of credit worthiness by mid-1994, for Grenada was a major financial and economic achievement and it laid the foundation for many future economic developments.

At its February 4, 1994 meeting of the Executive Board of the I.M.F on Grenada, the Board concluded, “All executive Board members were positive about the direction of Grenada’s fiscal policy that was center of discussion”.

The Board further wrote:-

“The foregoing information provided clear and convincing evidence of the restoration of international confidence and credit worthiness to Grenada under the current administration”.

This was remarkable achievement in three years at that point.

As a result of the success of Grenada’s Structural Adjustment Program, Grenada qualified for and received over EC$100M worth of concessionary loans from the World Bank through C.D.B. viz.

Additionally, Grenada received a bonus of $6.5M for being the best performer for administration, accountability and performance under its Lome’ IV program in 1992, 1993 and 1994.

These are some of the benefits Grenada enjoyed as a result of the success of its ‘Home Grown’ Structural Adjustment Programme.

The current Prime Minister is fully aware of these benefits that came to Grenada as a result of the performance of the 1990-95 NDC Government.

The Brizan Family wishes that Dr. Mitchell will desist from dragging the name of the late George Ignatius Brizan into his political campaign speeches as he seeks the support of the electorate for another term in office.

Please allow his soul to Rest in Peace!!!