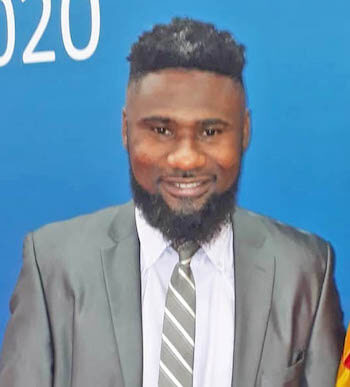 It’s a sad situation to invite the unvaccinated vendors, and People of Grenada to come out and support the cricket (and) the persons who have attended, we need to try to find a way to bring about the realisation that what they are doing is being like puppets on a string…

Those were the words of Civil Rights Activist, Earl Maitland who in an exclusive interview with THE NEW TODAY on Monday, condemned what he described as the “short-lived memory” of some individuals, who in his view “seem to have forgotten the barbaric times of victimisation that we (unvaccinated individuals) have been through for almost two (2) years,” due to COVID-19 regulations imposed by the ruling Keith Mitchell government.

His comment on the issue came against the backdrop of the last minute decision taken by government to allow unvaccinated individuals to enter the Grenada National Cricket Stadium at Queen’s Park to witness in the just-concluded international test match between England and the West Indies, and being promoted as a fully vaccinated event.

“The short-lived memories of our Grenadian people, it’s very disturbing…it seems as though the Grenadian people have forgotten the victims…” quipped Maitland, who following the announcement took to his social media page where he encouraged Grenadians to boycott the cricket match in a Facebook post that read: “Grenadians, unvaccinated especially, we were treated with no dignity, less than human. Let Keith and his vaccinated possie go to cricket. Stop being a matter of monetary convenience.”

Maitland has often stood in solidarity with unvaccinated workers in the tourism and hospitality sectors, craft, and spice vendors, who were not allowed access to their booths during fully vaccinated bubble tours throughout the ongoing endemic.

He noted that these people were among a group that was offered an opportunity to vend at last week’s cricketing event, and recalled being informed of a situation about two (2) weeks ago, where unvaccinated craft and spice vendors were refused entry into their booths at the Grand Anse Vendors Market.

“To add insult to injury,” the government extended the last minute cricket invitation, even before the planned April 04 removal of the remaining precautionary measures, he said.

Maitland also took issue with the fact that the government is now “willing and able” to remove the restrictions at the main port of entry, even amid a resurgence of cases in some major tourist markets internationally.

He also used the opportunity to criticise the decision to also have Carnival this year, after two (2) years, due to the ongoing pandemic.

“If this thing (COVID-19) was so serious how is it possible that all of a sudden all of the restrictions could just be eliminated at this point,” Maitland contended, noting that for “the last two (2) years we were told that we cannot partake in any carnival-like activities but this year we are all free to do so because the government has decided that it needs money, to get tourists to come to our shores…

“And, it says to any reasonable thinking person that this government priorities money and the people of Grenada are used as a financial convenience (as) the government is financially behind…to me, it is clear that this is just a matter of convenience for the government, especially in this election year,” he charged.

With the next general election just around the corner, the Civil Rights Activist also questioned whether this move by the ruling New National Party (NNP) regime to lift the restrictions, forms “part of the strategy to gain funds for whatever reason that might add to a successful campaign, and election for them.”

He pointed out that “we were told that we would not achieve herd immunity without at least 70% or 80% of the population being fully vaccinated, and having the booster shots.

“The last time I checked we had approximately 33% of the population fully vaccinated, and what we are seeing are the changes that the government told us would not occur without herd immunity,” he said.

“So, in reality, time has proven that we were lied to, and this is my unbiased opinion,” he remarked.

The Civil Rights Activist implored upon the People of Grenada, Carriacou and Petite Martinique to “really look beyond the partying, and everything, and recognise that their constitutional rights were removed unlawfully.

He noted that “to remove the constitutional rights of someone, you need justifiable cause or reason and this has not been the case for the last two (2) years.”

Additionally, Maitland said “it is very unfortunate” that PM Mitchell made no reservations for affected workers, mainly within the tourism and hospitality sectors who were “exploited and victimised,” and forced out of a livelihood during the last two (2) years of the pandemic.

When he addressed the nation on March 17, days ahead of the just concluded cricket match, Prime Minister Mitchell pledged his government’s commitment to “safeguarding lives and livelihoods” due to the  economic storm brewing on the horizon as a result of Russia’s invasion of Ukraine.

Weeks earlier, Health Minister Nickolas Steele told reporters that the government has no intention to interfere with private sector businesses that may wish to continue with vaccine requirements as a condition for employment, and entry onto their compound, even after the COVID-19 regulations are officially discarded next week Monday.

Prime Minister Mitchell, who had previously avowed to not provide incentives to individuals who lost their jobs because they did not get vaccinated, had approved an EC$5 million allocation to refurbish the stadium for the hosting of the 4-day cricket match.

In a Government Information Service (GIS) release on Monday extending congratulations to team West Indies following Sunday’s victory against England, the Grenadian leader, who is a former national player, alluded to the economic spin-offs of the match as being a tremendous boost for the economy, particularly, in the accommodation and business sectors.

“The government made the right move to invest in this game, there are absolutely no regrets, it has been a big boost for cricket fans, the people generally, and the business sector. Given the impact of the pandemic over the last two years, the people of the country needed that,” PM Mitchell is quoted as saying.