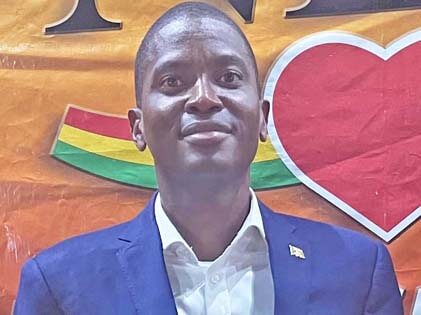 If our government continuously spends more than it receives, and borrows to finance the difference, we will continuously be in a position where the vast majority of our resources are spent trying to repay unsustainable debt.

This is the view expressed by the newly elected Political Leader of the National Democratic Congress (NDC) Dickon Mitchell who added his voice to the critics of the EC$1.3 billion budget that was presented in Parliament approximately two (2) weeks ago by Finance Minister Gregory Bowen.

The 44-year old attorney-at-law who is a first-timer in local politics took a shot at the budget during an NDC press conference last week at Spice Basket, Beaulieu, St. George, to air the party’s view on the measures and budgetary allocations that were announced.

He said: “The budget statement clearly says that there is a deficit of close to $100 million. In simple terms the government intends to spend more than it can earn by at least $100 million, and where is this financing going to come from?

“It is gonna borrow to do so, and our debt to GDP (Gross Domestic Product) ratio stands at 70%…34% of the entire budget is being spent to pay a debt, and yet you would present a budget that puts you in a position where you are going to borrow another EC$100 million,” he told reporters.

According to Mitchell, the billion-dollar budget “does not substantively address the issues” that are facing the country at this time.

Noting that “the largest part of the government’s budget has been on its public sector investment programme,” Mitchell took issue with what he called the Keith Mitchell administration’s “love affair with concrete” and expressed the view that more money should be spent on the productive sectors to help grow the economy.

“Citizens of Grenada, you need to only look at the budget speech, and you will see countless references to this programme, this project, and this infrastructure work. You live, drive, and walk around Grenada, and you see for yourself whether there is any plan in relation to these public sector investment programmes or whether they are not just more of the same, starting to construct a road, a drain in the middle of nowhere and then leaving it.

According to the new NDC leader, spending money on concrete and steel “does not result in the medium or long term growth of the economy, and it is compounded when you are borrowing to do so”.

“…If we wish to transform our economy, if we are going to borrow at all, the borrowing must be for the productive sectors, the sectors that will grow our economy because when the economy grows the government gets additional revenues and it allows you to sustain, repay, and pay down your debt. It is as simple as that,” he told reporters.

Mitchell also holds the view that “we run the risk of starvation and destitution if our resources are not put into agriculture, food security and food nutrition,” and used the government’s “$5 million allocation to refurbish the cricket stadium” for the upcoming Test Match between West Indies and England in March 2022, as a contrast to the “$19 million allocation for Agriculture” as opposed to the EC$35 million that was announced in the 2022 budget by Finance Minister Bowen.

Citing “Appendix 1” of the budget statement, which “contains the allocation by votes,” the NDC Political Leader pointed out that “the allocation in the vote for Agriculture is EC$19, 250 945, not EC$35 million” as Bowen announced.

This figure, he noted, “represents a mere 1.4% of the entire budgetary allocation.”

“What does that tell us when we are in the midst of a global pandemic that has made the cost of food rise significantly…that has made freight cost triple in some instances…that has posed significant disruptions to the export and importation of goods?

“It means that as a small island we are very vulnerable to this disruption, and therefore it is incumbent upon us to ensure that we can sustain ourselves by feeding ourselves (but) how can we do that if only 1.4% of our billion-dollar budget is allocated to food security, food nutrition, and agriculture, and you can contrast that with the percentage allocation for concrete, drains, etcetera.

On the issue of health, the Congress leader said, while “we are living through a pandemic (and) all indications are that this pandemic is going to remain, that the coronavirus is continuously mutating and new variants are ensuing…we have to ask ourselves – how does our budget prepare us so that we can continue to survive and eventually overcome the ravages of COVID-19?”

“Regrettably,” Mitchell believes that “the budget does not address in any substantive way the challenges posed to our health sector by COVID-19.”

The Finance minister had announced that EC$97.1 million is earmarked for the Ministry of Health for 2022, an overall increase of $2.2 million from 2021, as well as EC$20.9 million to support the recovery of the hospitality industry in tourism, which is also larger than the allocation for the agriculture sector.

Mitchell criticised the government’s approach to dealing with the health crisis, contending that no explanation was given about “the steps and measures that would be taken via the financing of the Ministry of Health to strengthen our capacity to treat with and deal with COVID-19.”

Permanently increasing the number of hospital beds, upgrading and expanding community health centers across the country, and regularising the status of contract nurses, are among issues that the NDC Leader proposes should have been prioritised to address the health challenges in the 2022 budget.

Mitchell told reporters: “Given the challenges posed by COVID-19, (and) the other challenges that we have in our healthcare, it cannot be right that the government has made no effort, and has allocated no funds to increasing the number of beds at our hospital, and the National Democratic Congress would have ensured that funds were allocated to address that.”

The aspiring Prime Minister, who outlined that an NDC administration would have moved to provide incentives and higher wages for healthcare workers at this time, urged Grenadians to “become familiar with the National Sustainable Development Plan 2020 – 2035, which “highlights at least 32 action points that are required to put Grenada in a position where it has improved and sustained healthcare.”

Stressing that the incumbent NNP administration has had a significant role to play in the development of the plan, which is geared to “put us on course to achieve sustained development between the period 2020 and 2035,” Mitchell also said that this plan should have guided its budgetary allocation to address the health care challenges now facing the country.

The new Congress boss is down to contest the St David seat with the hope of becoming the next Prime Minister of Grenada, when the ballots are tallied at the end of the next General Election, which is constitutionally due in 2023.

Speculation is rife that Prime Minister Dr. Keith Mitchell might be inclined to call the poll sometime between March and July.