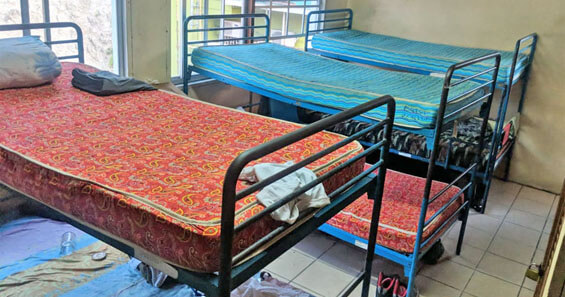 The Royal Grenada Police Force (RGPF) is one of the groups hardest hit by Grenada’s current wave of COVID-19 infections and one Officer who battled the disease is blaming poor living and working conditions for the outbreak that has swept through the ranks.

The Officer, who asked that his identity not be revealed, said conditions at the police complex on the Carenage, where infection rates were the highest, allowed for mass spread among the ranks.

Over ten percent of the police force had been infected at last count.

According to the officer, since the pandemic began and even during this current outbreak no precautions were taken to protect the police officers who live together in the three barracks at the Carenage.

On duty officers attached to the Fire department, Traffic department and the Central Police station live in very close quarters with bunk beds situated next to each other making it easy for one infected person to pass the virus to their fellow officers.

Commissioner of Police Edvin Martin had said publicly that they are taking all precautions to protect the police and the public who come into the stations but the policeman who spoke with THE NEW TODAY holds a different view.

He said that officers at Central Police Station who interact with the public a lot, in and out of the station, are not provided with masks, gloves or sanitiser even though they have asked for these supplies and even the public health protocols were not being strictly followed.

“I asked for sanitiser about a week before I got sick and I was told that I could buy a small bottle in town,” he said, adding, “They need to place more priority on the health of police officers”.

“They say we are frontline workers but we are not getting frontline treatment.”

The officer said even when he started having symptoms a senior officer accused him of lying about being unwell and he was forced to remain at the police station although the officer in charge was also made aware of his condition.

He said as the outbreak became worse the infected were all moved to one barrack.

However, when THE NEW TODAY contacted the Community Relations Department (CRD) of RGPF for comment, it was told that the police force does have masks and sanitiser available for officers.

Since the outbreak of the deadly virus began, two police officers, Assistant Superintendent of Police (ASP) Byron “Donkey” Clyne who was second in command at Central Police Station and along with traffic officer Andy Greenidge have succumbed after coming in contact with Covid-19.

Police officers who became infected were quarantined at the old St. George’s University (SGU) campus on Grand Anse Beach and according to the policeman they were neglected and forced to look after their needs.

“In the quarantine, if you have no one to help you, you are not getting anything,” he explained.

He said he managed because his partner was able to bring him the medicine and foods that he needed, which he shared with the other seven officers who were in quarantine at the same time.

When asked about the Commissioner’s role in creating better conditions for police officers, his response was, “I have a feeling that due to the political landscape he cannot do the things he wants”.

According to the officer, an Assistant Superintendent of police who was lobbying for better living and working conditions for the officers at Central was transferred to rural Grenada soon after he began requesting improvements at the police station.

The officer said that apart from limited space in the barracks, the condition of the building is in a very poor state, with termite infestation, rotting floorboards, and windows that do not keep the rain out.

“We get wet when rain falls,” complained the officer who has been stationed at Central for years.

Earlier in the month, Deputy Commissioner of Police, Michael Francois told reporters that RGPF was trying to follow the Covid-19 protocols put in place by the Ministry of Health to protect its members from Covid-19.

“We are trying to do all that we can do to ensure that our work environment is safe. We have been sanitising all of our buildings. We have brought in a particular company that has been assisting us in sanitising most of our police stations,” Francois was quoted as saying.

He also said that police officers are aware of the protocols to follow such as sanitisation, social distancing, wearing of masks and washing of hands in order to try and remain safe from the deadly virus.

Francois said: “…We have also been following the distancing as much as possible to ensure that there are no clusters in any one place at a particular time. We have given instructions to all of the police stations about what must be followed.

“We are also recommending to officers that they should get vaccinated. This is something that we have been going right around the police force and encouraging officers – it is not mandatory,” he added.

In an interview with a local radio station, Prime Minister and Minister for National Security, Dr. Keith Mitchell said he was heartened by the rate of recovery among police officers affected by COVID-19.

In an interview on Sister Isles Radio in Carriacou on Tuesday, Dr. Mitchell said, “The job of the police force is to protect us, and since the start of the pandemic, they have been making tremendous sacrifices to fulfil this duty.

Unfortunately, some of them became infected with the virus, but I am heartened to hear that many of them have recovered. I must thank them for the immense sacrifices they continue to make to ensure the safety and security of Grenada, Carriacou and Petite Martinique.

They deserve all the commendation for the work that they are doing at this time, as part of our frontline personnel. We have to be grateful for their dedication and I want to encourage the people of this country, not to add to the burden they already face. It is important as law-abiding citizens, to play your respective roles in adhering to the recommended protocols.”

In recent weeks, a significant number of police officers either tested positive for COVID-19 or were placed in isolation due to exposure to the virus, which placed an additional burden on the system and required various adjustments to ensure that police operations continued seamlessly.

The majority of affected officers have since resumed active duty, having recovered and/or completed the period of isolation.