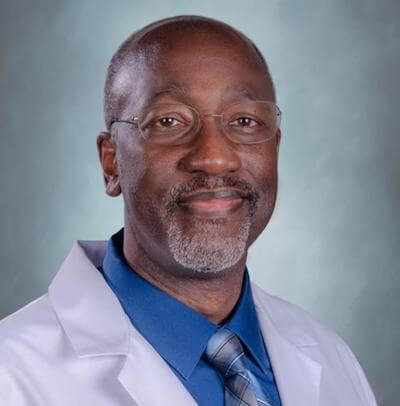 Dr. Kenneth Robert - warns that COVID-19 could become deadlier as it mutates

As the novel coronavirus continue to spread and change into different variants, United States-based medical doctor Kenneth Robert tells local media the concern now is that if vaccination levels are not attained, there is a possibility that the virus, which has shown to mutate in unvaccinated persons, could become even more deadly.

The Grenadian-born doctor, who practices family medicine in Roanoke Rapids, North Carolina (NC), shared this concern as he responded to questions posed by THE NEW TODAY over the efficacy of the Astrazeneca, and other COVID-19 vaccines, against the different variants of the virus.

Dr. Robert met with local reporters at a press conference in St. George’s, where he attempted to address concerns about the virus and to encourage a seemingly reluctant population to get vaccinated.

Since its emergence in November 2019, the coronavirus has mutated into eight (8) variants – the Eta, Lota, Kappa and Lambda, which the World Health Organisation (WHO) classified as ‘Variant of Interest (VOI), while the Alpha, Beta, and Gamm strains are categorised as Variant of Concern (VOC), along with the Delta variant, which is the newest strain to emerge, and was confirmed on island last week by Health Minister Nickolas Steele.

Dr. Robert explained that while “there are some vaccines that are not as effective against the variants,” if persons get vaccinated they will obtain some level of immunity”.

“I have not heard that the AstraZeneca is not effective against the new variant that seems to be a big issue now, the Delta variant but even so, my thought is (that if you get vaccinated) you will get some degree of immunity,” he said.

The medical doctor also referred to the concern of scientists and medical experts like himself, that “if more, and more people are not vaccinated then you still end up with those variants that none of the vaccines are going to work for, and therein lies the problem.”

“For those of us, physicians (and) scientists’, when we look at the virus, and what is happening, the concern is about those variants because what we are seeing now is that there is a possibility that COVID can be a much more deadly virus (because) it can mutate or change…and now you have this virus that is changing as it goes from person to person, and eventually you might end up with something that is much worse than what we already have,” he said.

According to Dr. Robert, there is also the possibility that the virus can also mutate and cause no effect to humans.

The coronavirus was first recorded in China in November 2019, and has since caused more than 3.7 million deaths globally.

Now, a year and a half later, Grenada and other countries around the world continue to struggle to meet targeted vaccination levels.

Grenada has recorded 164 coronavirus cases to date one (1) death and 161 recoveries, and as the country moves to fully reopen its borders amidst the COVID-19 controversy, members of the Keith Mitchell led-government have warned that it is only a matter of time before other strains of the coronavirus is found on island, and encouraged persons to get vaccinated.

However, the ongoing plight for Grenadians to get vaccinated appear to have fallen on deaf ears as many Grenadians refuse to take the AstraZeneca vaccine, which is the only COVID-19 vaccination available on island, while some have opted to using local herbs to boost their immune systems.

However, when asked Dr. Robert advised against the use of herbs as a strategy to protect oneself against COVID-19.

“I think natural remedies have their place. I think anyone who would like to boost their immune system, I say yes, go right ahead but I think it would not be the right move to think that boosting my immune system (with herbs) should be my strategy to protect me against COVID-19,” Dr. Robert told THE NEW TODAY.

The Family Medicine Specialist pointed out that “Covid-19 vaccines are made to create antibodies against the spike protein, which is a more stable protein of the virus,” which is expected to produce “a much bigger immune response.”

“Variants,” he explained, “are just mutations that happens in the virus (and) when those mutations are high enough then the antibodies that someone has made may not work.”

“So, one of the real big issues for us is pushing people to get vaccinated because for example, if everyone in this room was vaccinated, and one person comes in, and they have COVID, it stops there. There is no one who would get it, no one is going to pass it on to anyone else. I may contract it, it might go into my system but it doesn’t go anywhere from there (because) it cannot mutate, it cannot do anything,” Dr. Robert explained.

He said, when the vaccines came out, he like almost everyone said, “really, that quick, I don’t think so,” but after “looking into how these vaccines were made, and what processes were employed in the making of the vaccine,” Dr. Robert said, “I got really excited because when I was in college, we were doing cell and molecular biology, and in that lab we envisioned the time when we would be able to use that technology to make vaccines, and therapeutics for different kinds of medical conditions.”