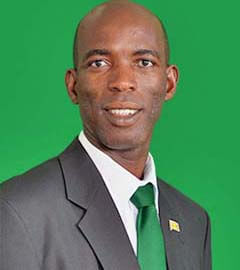 While the New National Party (NNP) government of Prime Minister Keith Mitchell has promised lower electricity rates to domestic consumers whose kilowatt per hour (kWh) usage does not exceed 500, with the rise in fuel on the world market expected to continue, there are concerns that the gesture can have repercussions for consumers, as businesses, which are left to face higher electricity rates may be tempted to pass it on in the form of higher prices for their goods and services.

This view was articulated by Opposition Leader Tobias Clement and others in their economic analysis following the announcement by Finance Minister Gregory Bowen in the 2022 budget of plans to zero-rate the Value Added Tax (VAT) on electricity consumption and to remove the Environmental Levy (EVL) for domestic consumers whose usage do not exceed 500 kWh,” as part of relief measures amid the COVID-19 pandemic.

Clement, who opened the debate on the budget in the Lower House of Parliament on Monday, contended that the Finance Minister “did not say how long it (the relief) would last,” and expressed the view that “it would have been more profitable for the government to invest in LED’s (lamps or bulbs which produces electric light using light emitting diodes) and distribute it across Grenada.”

Noting that “most of the places that pay high electricity bills might be companies that have electricity as part of their overall cost,” the Opposition Leader emphasised his argument, stating that “if I have a company, and I have to pay EC$20, 000.00, $30, 000.00 for electricity a month, do I absorb this cost for myself – no, Mr. Speaker, I will pass it on to the consumer”.

“So, therefore the consumer in the long run will have to fork up the money to pay the bill through (the) cost of goods and services,” he explained.

According to an informed source “a preliminary investigation on the type of persons who would pay up to 500 kWh of energy” shows that “low and middle-income groups of persons” are those targeted since “their electricity bill every month will not exceed $250.00 which means that they are paying less than 500 kWh of energy.”

“So, while it (lower electricity rates) would affect positively that income group, it would be an advantage for the businesses whose kWh of consumption far exceeds 500 every month, and because they are businesses, they would not want to absorb all these higher-cost themselves. They would be tempted to pass it on to the consumer in the form of higher prices of goods and services, which in fact would nullify the effect that the lower energy rates would have for the consumer, and given the extent to which it could affect those big businesses, it could be worse for the low and middle-income group consumers if the pass on is greater than the relief they are getting from the removal of the tax,” the source told THE NEW TODAY on Wednesday.

Concerns have also been expressed that while the Grenada Chamber of Industry and Commerce (GCIC), which is the official voice of the private sector, can come together as a body to determine whether or not they are going to pass on or not pass the cost, there is nothing binding on an individual businessman to prevent them from doing otherwise”.

“They can act otherwise,” said the source, who holds the view that “the Grenada Chamber of Industry and Commerce should prepare a paper on the budget with those kinds of analysis.”

Also as part of the new relief measures announced, Minister Bowen said that “a reduction of 25% on the non-fuel charge per kWh will be instituted for all categories of consumers to take effect as of the next billing cycle.”

He also told Parliament that the government’s ability to provide a reduction in electricity rates would not have been possible had it not moved to acquire ownership of Grenlec, the sole electricity supplier on the island from the U.S-based power company, WRB Enterprises.

However, Clement blasted the Finance Minister for pushing a false narrative on Grenlec, expressing the view that the statement is misleading on lower electricity costs to consumers.

“That is not true. So, why should he (Finance Min. Bowen) come to this house and make a statement like that,” Clement argued, noting that “VAT could be removed at any time because VAT belongs to the government.”

“Even the taxes on petrol, it belongs to the government (so) don’t make it seem as if we had to buy back the company so that we could move these things,” he added.

However, Prime Minister Mitchell defended Bowen’s statement that “if WRB (WRB Enterprises) was still in charge the non-fuel charge would not change” when he contributed to the 2022 budget debate on Wednesday.

Presenting a breakdown of the formula used to calculate electricity charges, PM Mitchell noted that while the “government has no control over the fuel charge,” it is “the non-fuel charge (that) will decrease due to the interventions of this government.”

“The Minister was talking about the non-fuel charge that the government has now intervened on – he wasn’t talking about VAT…so, he took responsibility. Mr. Speaker, the Minister was absolutely correct and could not be challenged factually for the statement that he made”, Dr. Mitchell told Parliament.

Following the US$63 million buy-back of Grenlec from WRB and the Grenada Private Power Limited (GPP) in December last year, the Keith Mitchell-led government promised lower electricity rates, and an aggressive pursuit to transition to renewable energy sources, and electric powered vehicles.

However, the regime was forced to backpedal on those promises with the Finance Minister telling reporters recently that this may not be realised until 2030, due to difficulty in sourcing the required funds.

The government gave the impression that the Grenlec rebuy would somehow put more money in the pockets of citizens since they will have a chance to purchase shares in the company, with Foreign Affairs Minister Oliver Joseph telling reporters back then that the island will become an attractive place to invest as prior to the buyback, “businesses were not attracted to Grenada to go into manufacturing because the input cost of electricity was so high…”

However, in his rebuttal, Clement told Parliament that now is the time for the government to consider offering shares in the utility company to ordinary Grenadians.

“I would ask the government before the election is called next year or the year after…make sure we diversify the shares of GRENLEC to the Grenadian people. I too may want to own a couple of shares,” said the Opposition Leader.

“Mr. Speaker, God forbid, as the elections turn on a dime, just perhaps GRENLEC might end up back in the hands of WRB…it would be a very sad thing in Grenada,” he added.

“All these goodies did not just come like that,” Clement told Parliament, hinting that there is more in the mortar than the pestle with a general election imminent.

“It is a good thing that I have friends in high and low places, and some of you guys (government ministers) only get to know (certain things) on a need to know basis because there is a lot of things that are going on inside the ambits of government that you would never get to know anything about because it’s under lock and key, only father and son would get to know,” Clement declared.

This is an obvious hint from the Opposition Leader that the NNP regime is tightly controlled and run by Prime Minister Mitchell and his long-time deputy, Finance Minister Bowen.