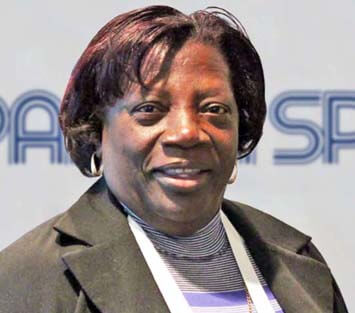 Veda Bruno-Victor is not giving up without a fight

Embattled General Secretary of the problem-plagued Grenada Olympic Committee (GOC), the controversial Veda Bruno-Victor is not bowing out and is making a bid to remain on the Executive in an election planned for September.

A well-placed source told THE NEW TODAY when nomination closed on Monday, Bruno-Victor had filed papers to contest her position of General Secretary with the lone challenger in Sports Journalist Ray Roberts.

He said that the former Permanent Secretary for Sports who is at the centre of the EC$440, 000.00 scandal involving unaccounted funds from Olympic Solidarity (OS), an army of the International Olympic Committee (IOC), has been lobbying several sporting bodies for their support for her candidacy.

“She’s fighting. I know the woman has been lobbying hard, I do this for you, I do that for you and so on,” ”he said.

According to the source, Bruno-Victor has made several telephone calls in recent days to executive members of the Grenada Athletic Association for their block of votes to help her to remain as General Secretary of the local body.

He said that several members of the athletic body have been expressing the view that they are totally unhappy with happenings at GOC and want change.

He pointed out that a number of persons associated with GOC have failed in their efforts to persuade the former national netballer not to seek another 4-year term on the GOC executive due to the many controversies involving her name.

A source said that Bruno-Victor has told close aides that if she does not run for the position it will send out a message that she has accepted that she did wrong things within the local Olympic body.

He stated that two other arguments advanced by the controversial General Secretary is that she hold two executive positions on regional sporting positions and should be kept on to remain in those critical positions and that she has worked hard over the years to build GOC and was reluctant “to allow a bunch of people to come and mash it up.”

“That is her problem. I have no doubt that she likes sports but she loves herself more. The only thing is that she has no locks but she is a classic female rasta … even in everything she does is I, I, I, I,” he said.

“She figures that she built this thing, she is responsible for it – she made it – it’s her mental state,” he added.

Bruno-Victor has come under the microscope following a probe conducted by the Finance Committee (FC) into the use of OS funds following demands from the IOC affiliate for the money to be repaid in light of no proper accounting for its use.

The FC report laid the blame on the General Secretary for spending thousands of dollars without leaving a paper trail to show how the funds were spent.

THE NEW TODAY understands that the anti-Bruno-Victor faction within GOC is also trying to topple most of the executive members who are said to have knowledge of the OS money issue and kept it away from the other members of the organisation.

There are reports that the long-standing President, 83-year old Royston La Hee, a key ally of Bruno-Victor, will not be seeking re-election after 38 years at the helm.

According to a source, a member of the so-called Gang of Four, athletic representative Charlie George has put forward his name for the post of President and will be challenged for the position by former Olympic Boxer, Bunny Wilson.

A GOC insider described George as one who can be considered as a competent person but not a visionary.

“He is a nuts and bolts guy and he was above board. He was very clear on transparency and accountability and processing and doing things right,” he said.

However, the source pointed out that George is tainted because of his relationship with La Hee and Bruno-Victor and many persons have accused him “of not doing anything because of those associations”.

He said that those persons who are opposed to George believe that he supported La Hee, Treasurer Kingsley Ashby and Bruno-Victor on the Olympic Solidarity (OS) $440, 000 money issue which was kept away from members of the association for years.

He also said that many GOC persons have been accusing George of showing reluctance “to go against his partner (La Hee) – they liming every day and being Directors of Huggins all these years.

“He (George) is suffering from a perception problem because he didn’t distance himself from them,” said the source.

According to the GOC insider, there is no guarantee that the Gang of Four can still end up in control of the GOC Executive because many persons who now oppose them have a past record of promising to do something and then doing something totally different in the end on Election Day.

At the end of Nomination Day, athletic representative Aaron Moses will contest the post of 1st Vice-President against President of the Grenada Football Association (GFA), Chenny Joseph, while the 2nd Vice-President spot will see a battle between Ralph James and Ralph Lord.

James has not attended a GOC meeting since last year after being investigated regarding allegations of wrongdoing but was nominated to contest the election by Secretary of the Tennis Association and Ministry of Sports employee, Jason Stanisclaus.

Johnson Dion will challenge Ashby for his position of Treasurer.