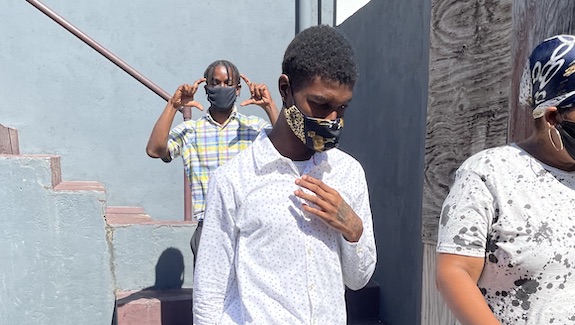 The two teenagers involved in the armed supermarket robbery in Victoria, St Mark

Police on the Western side of the island have made a significant breakthrough in the October 30 armed robbery at a supermarket in Victoria, St. Mark.

Two 18-year old St. Mark residents, Aaron Chase and Alvin Jerome were taken in custody and appeared before the Victoria Magistrate’s Court on Thursday for the offence of robbery.

Chase and Jerome were initially arrested in connection with the supermarket incident but were released by the police due to a lack of evidence.

According to an informed source, the duo was rearrested during operations at their homes last week Thursday around 1.00 a.m., and charged with the offense.

It is understood that Chase is also facing an additional charge of Robbery with Violence in connection with a wounding incident that occurred on May 27, 2021 at the Victoria Gas Station.

The teenaged assailants were armed with cutlasses and knives when they attacked the cashier at the supermarket and took away several items.

In-store video footage of the October 30 incident, shows one (1) of the suspects wearing a hoodie and had what appears to be a small cutlass or a large knife in hand to frighten the supermarket employee to get her to move out of his way as he proceeded to put items into a bag.

He was seen on video accompanied by an accomplice who also wore a hoodie.

The suspects have retained the services of American-trained attorney Jerry Edwin who applied for bail when they appeared the first time before the Gouyave Magistrate’s Court on Monday, insisting that the duo, who live in single parent homes be placed on strict bail conditions.

The matter was transferred to the Victoria Magistrate’s Court, where the teenage suspects made their second court appearance on Thursday.

Magistrate Foster, who also presides over the Gouyave and Victoria Magistrate’s Courts, used the opportunity to reaffirm the terms of their bail, which also includes seeking permission from the Court to leave the State.

The teenagers who are due to reappear in court on February 17, 2022 were also requested to report to the Victoria Police Station daily, and to be confined to their house or home space between the hours of 6.00 a.m. and 6.00 p.m.