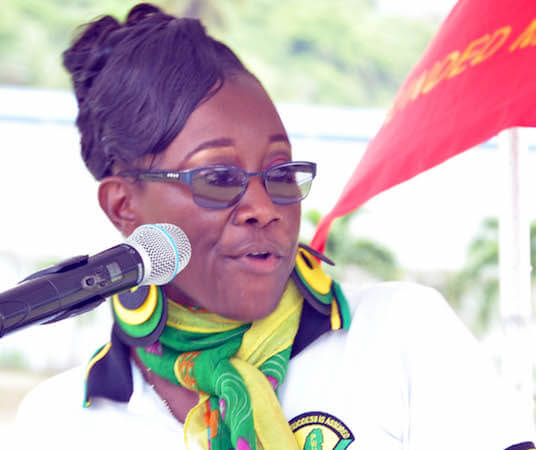 It didn’t come easy – it was a tough battle

Those were the words uttered Tuesday by former President of the Public Workers Union (PWU), Rachael Roberts in reaction to the landmark and historic judgment delivered Tuesday by high court judge Justice Raulston Glasgow to strike down a Pension Disqualification act which blocked thousands of civil servants from getting a state pension at the end of their tenure with government.

Roberts, who initiated the court proceedings during her term in office, was in celebratory mood after hearing that the judge had delivered a blow to the Keith Mitchell-led New National Party (NNP) administration which is now forced to find over EC$1 billion to pay out to retired public workers.

“First of all I want to thank God because this is a victory for God – it is God’s victory,” said the former union boss who is a practicing Roman Catholic.

“This did not come easy so we have to give God thanks and praise. All public officers need to go down on knees and thank the Father and we have to thank our legal team who believed in us, who believed in the process” she remarked in an exclusive interview hours after the judge handed down his ruling.

Roberts singled out for special mention, newly appointed Queen‘s Counsel, Jimmy Bristol who was the lawyer that took the very first case to court and also came on board for the second case filed by PWU to get the court to strike down the Pension Disqualification act that prevented thousands of public officers from getting the pension as outlined in the 1974 Grenada Constitution Order.

She also praised the efforts of the two other attorneys who joined the court battle along the way – former Attorney General Cajeton Hood and Ruggles Ferguson of Ciboney Chambers.

In addition, she commended the two other union leaders – Andre Lewis of the Technical & Allied Workers Union (TAWU) and Lyden Lewis of the Grenada Union of Teachers (GUT) who agreed to fight the matter in court alongside PWU against the Mitchell-led government.

Roberts specifically identified Hood as the lawyer who was able to move the court to hear this particular aspect of the case in which Justice Glasgow ruled in favour of hundreds of public officers in a decision that now forces the State to find over one billion EC dollars due to them over the past 39 years.

“We must commend them – they did an exemplary job and public officers have to give them the thanks. After God we have to praise them and thank them,” said the senior civil servant who is attached to the Corporate Affairs and Intellectual Property Office (CAIPO) on Upper Lucas Street in St George.

“When nobody believed in that process, Mr. Bristol and Mr. Hood trusted and believed that we had a case and the Constitution would be upheld,” she said.

The controversial pension issue for public officers arose from the suspension of the Constitution when the left-leaning New Jewel Movement (NJM) of Maurice Bishop seized power by force of arms on March 13, 1979 against the elected Eric Gairy government.

The Bishop-led People’s Revolutionary Government (PRG) made the Pension act become null and void and established the National Insurance Scheme (NIS) to provide some form of pension for civil servants.

In 1985, the Constitution was restored with the downfall of Marxist rule on the island, and the three public sector unions on the island – Public Workers Union (PWU), Grenada Union of Teachers (GUT) and the Technical & Allied Workers Union (TAWU) were forced to engage in lengthy court battle over the years to finally get the ruling in their favour.

The former PWU leader warned that the court victory is not fully completed as public officers will still have to individually take court action against the current regime to pay them their pension in keeping with Tuesday’s court ruling.

She called on public officers to now go out in numbers to the offices of the victorious attorneys and file a flood of cases in court against the Mitchell government in order to get the pension legally due to them.

Stating that the road is now clear on the issue, Roberts stressed that “the unions couldn’t take government to court for pension.

We couldn’t do it – all we could get is a declaration and we have gotten that today (Tuesday) so that is the victory. It is the first step – now public officers must get their pension (by taking out individual court cases against the State). Everyone (must) come together and file for their pension in the court because we are entitled to it. Our constitution clearly states that we are entitled to pension,” she remarked.

The ex-PWU President also sought to downplay the suspicious act of two former union leaders – Andre Lewis and Lyden Lewis – who on the eve of the 2018 general election signed onto a controversial Memorandum of Understanding (MOU) with the NNP administration on the restoration of pension for public officers under a new formula that deviated from the Pension act under the constitution.

Speculation was rife in some quarters that the deal was worked out to give Mitchell’s NNP a decisive advantage on Polling Day over the main opposition National Democratic Congress (NDC).

We may have taken some winding roads and we may have gone off-track but we came back on track and I wished that public officers had listened to their President when I said to them that we are entitled to a constitutional pension, let us take the matter to court and let the rest do whatever they had to do but let us go to court.

Today, we could celebrate that God has given us the victory despite the winding way that we took to get to where we are today. It wasn’t an easy battle – it was a lot of fight but God prevailed and our constitution has been upheld so to God be the glory, great things he has done today and we have to say thank you to the judge who upheld the Constitution of Grenada and followed the laws of Grenada.

He (Justice Glasgow) has to be given some thanks and some praise for his bravery because it is not an easy road to go against what the government wants and ensure that the Constitution of Grenada is upheld. It shows that the laws of Grenada can take precedence and will take precedence and will be upheld. It demonstrates that Grenada is still a country where justice can be received. Democracy has prevailed so thank you Justice Glasgow – I want to thank you.”