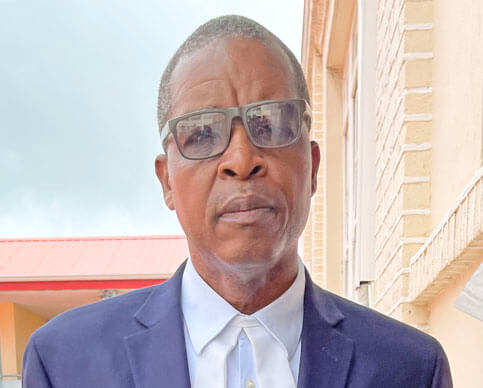 While a person’s fundamental right to work is guaranteed by the Grenada Constitution, at least one legal mind in the country holds the view that “the right to work may not be an absolute right after all.”

This position has been advanced by American-trained Attorney-at-Law Jerry Edwin who noted that more and more workers on the island are now being told to get vaccinated against the coronavirus as a condition of employment especially in the private sector.

In an exclusive interview with THE NEW TODAY, Edwin added his voice to the public debate on the developing controversial issue of forced vaccination in workplaces especially in the tourism industry.

He said that “there is no evidence” to show that the Coronavirus “is present here” and wreaking havoc in the country.

He condemned the emerging employment policy, which has received support from the ruling New National Party (NNP) government of Prime Minister Keith Mitchell, who had previously avowed to not pass laws to make coronavirus vaccination mandatory in Grenada.

The Leo Garbutt-led Grenada Hotel and Tourism Association (GHTA), which has long indicated its intention to have all employees vaccinated in order to qualify for the ‘Grenada Safe Vaccination’ stamp, the world’s first-ever global safety, and hygiene stamp, which was created to address COVID-19, and similar outbreaks, and to replace the World Travel and Tourism Council (WTTC) ‘Pure Safe Travel ‘stamp.

Earlier this month, the Grenada Co-operative Bank Limited (GCBL) became the first financial institution on the island to enforce mandatory COVID-19 vaccination for staff, and Board members while unvaccinated employees of St. George’s University (SGU) have been banned from coming on the compound amidst protest action.

One unvaccinated worker, who has been employed with SGU for the last eight (8) years, and is nursing a new born baby, called on the Mitchell government to provide clarity on the issue of vaccination.

The worker told reporters that “while the government is saying that they are not making the vaccine mandatory, they are (also) making it in a way that we do not have a choice when they are jeopardising our livelihoods, our rights to be human beings, to work, and to be privileged to take care of our families.”

The acting Chief Medical Officer (CMO) in the Ministry of Health, Dr. Shawn Charles has also sent out a warning letter to Sandals La Source, earlier in the month that the hotel ran the risk of being declared “non-compliant” to the directive given by the Ministry of Health that all workers in the hotel industry should be vaccinated as a means of added protection against the Coronavirus.

Attorney Edwin described the CMO’s letter to the international hotel chain as “a direct threat to workers that we will starve you out if you do not take the vaccine.”

He contended that there are other ways to deal with the situation, and protect the livelihoods of affected workers.

“…We have to agree that one does not gain a substantial employment income from working at Sandals (or) anywhere in the tourist sector. These are de minimis (too small to be meaningful or taken into consideration; immaterial) wages but these are respectable jobs that hard working persons here in Grenada rely on to support their families, to send the children to school…,” he said.

“…And for Grenada to stand as does, as a pariah state (a nation considered to be an outcast in the international community), in blackmailing the citizens of its country, when there is no evidence that we have the virus present here, when we have withstood the worst of the pandemic – we are in an area of inhumanity to our citizens, and that is frightening frankly,” he added.

Related:  PWU Boss: “It’s not tangible regularisation in my view”

Attorney Edwin told THE NEW TODAY: “Imagine that there are persons who have mortgages, who have children that they want to send to summer programmes – what are their options?

“I know our government is not saying, if you do not vaccinate you either die from the Coronavirus or from hunger. Is that what the health officials are saying to Grenadians (that) you cannot work (if you don’t take the vaccine) or, die from hunger because we will strip you of your employment?

“The knee-jerk reaction of the health officials in Grenada must really give us pause to wonder – what is their motive really? Are they thinking of the virus, are they thinking of the citizens of Grenada or do they have another agenda? Because it makes no sense…If we are concerned about the pandemic clearly people can take a PCR test to determine the level of their health, there are ways to get around this.

Attorney Edwin contended that “the vaccine is not 100% prevention against the virus,” pointing out that there are natural homeopathic medicines that have proven to be more effective.

“Indeed, it can be argued, and many have, that natural homeopathic medicines are more effective against the virus …so, we think that our health officials in Grenada are unrealistic entirely, and their treatment of our citizens is nothing less than barbaric,” he remarked.

Under the PROTECTION OF FUNDAMENTAL RIGHTS AND FREEDOMS”, the Grenada Constitution states in part: “…Every person in Grenada is entitled to the fundamental rights and freedoms, that is to say, the right, whatever his race, place of origin, political opinions, colour, creed or sex, but subject to respect for the rights and freedoms of others and for the public interest, to each and all of the following, namely- life, liberty, security of the person and the protection of the law ; freedom of conscience, of expression and of assembly and association; protection for the privacy of his home and other property and from deprivation of property without compensation.”

The section went on to say that persons are also entitled to “the right to work (and that) the provisions of this Chapter shall have effect for the purpose of affording protection to those rights, and freedoms subject to such limitations of that protection as are contained in these provisions, being limitations designed to ensure that the enjoyment of the said rights, and freedoms by any person does not prejudice the rights and freedoms of others or the public interest.”

Attorney Edwin, who compared the government’s actions to “a level of barbarism,” argued that “the right to work is not an absolute after all (as) “it is between an agreement between an employer, and an employee.