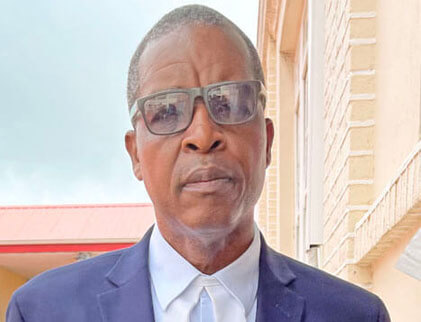 Attorney Jerry Edwin – is not new to making controversial statements

Outspoken attorney-at-law Jerry Edwin has raised concerns about the medical health of Prime Minister Dr. Keith Mitchell over his failure to show the door to Health Minister Nickolas Steele over what he sees as his massive failure in handling the Coronavirus pandemic in the country.

In an exclusive interview with THE NEW TODAY, Edwin stated that a fit Dr. Mitchell would have lost patience a long time now with the performance of Steele and replaced him with a much more suitable person like Member of Parliament for St. Mark, Dr. Clarice Modeste-Curwen who would better understand the language of her colleagues in health now driving the island’s fight against the deadly virus.

He said that over the past 18 months of Covid-19, it is clear that the task given to the Health Minister is “a weight too heavy” for him to carry and called for his replacement with “someone who can stand up under the crisis and he (Steele) cannot.”

The lawyer described Steele as the leader in the “most important sector of our government” to manage the Covid-19 crisis but the records will show that he “has absolutely fallen down on the job.”

“He (Steele) is incapable of carrying the villain and has no education or skills capacity in health. Mr. Steele needs to find a different job. Dr. Mitchell needs to put him in another ministry.

According to Edwin, he has detected that PM Mitchell for the first time in his stint as head of the government for the past 25 years is showing indecisiveness in taking action against a below par Minister.

The attorney stressed that since coming back from the United States to take up residence in his homeland in the past 7 years, he has seen PM Mitchell as one who is often “quick on the draw, decisive – rightly or wrongly so – he will step into the breach wherever he sees there is a problem.”

“He (PM Mitchell) has shown an ability to replace Ministers of government when they are ineffective in his view (but for) for some reason the Prime Minister seems incapable of acting at a time when our nation badly deserves urgent action.

Edwin told THE NEW TODAY he has formed the impression that PM Mitchell is also showing signs that he is struggling to come up with a solution to the current health crisis facing the nation.

“I am urging Grenadians to bolster our Prime Minister because I think he is not operating on his usual 8 cylinders. I see the man speaking and am very concerned as a citizen as a human being about the health and welfare of our Prime Minister. It is not like him.

“I want to ask a question that is not rhetorical – how is the health of our Prime Minister? How is he doing? How healthy is he? I am concerned about him. I think as citizens we should reach out and try and help him in a time like this to manage this crisis.

“I think if the Prime Minister was on all-fours he would have removed Nickolas Steele. He would have re-installed the medical doctor in the ministry in a place that is a natural fit for her.

“She has the credibility and the respect from her peers on the Covid team – they speak the same language. Nickolas Steele doesn’t know the language of health. It is clear that his priority is not with life but with livelihood and therefore I am calling for his immediate removal from the most important ministry in Grenada at this time.

“We need someone with the skills and expertise within the Government of Grenada and I am calling on Dr. Mitchell to put such a person in place and we need some indication that the Prime Minister is well and able to make such a decision.

Given the amount of daily Covid-19 cases on the island in recent weeks, Edwin said: “I think the Prime Minister would have replaced Nikki Steele if he was well.

“Mr. Steele is a businessman – business people are less concerned about life and more about livelihood,” he said.

The attorney drew parallel to sports when a team has lost badly and in business where the Chief Executive Officer (CEO) has failed to perform, they know that they will soon be replaced by the Directors of the company.

He pointed specifically to an incident a few months ago in which Minister Steele was seen in public in the company of controversial U.S actor Steven Seagal with both of them not wearing masks in defiance of a policy outlined by the Ministry of Health in the fight against the deadly virus.

Edwin noted that Steele was put in charge of the Health Desk by the Grenadian leader when it is known that he has no experience in the area.

The attorney recalled a meeting which took place around 2012 at the Spice Island Beach Resort among a small select group of people including Steele, Prime Minister Mitchell, as well as former Trade Ambassador, Dr. Patrick Antoine as Chairman in which a major announcement was made by the current Health Minister who at the time was Manager of the family-run Steele’s Auto Supplies.

He said that Steele who was sitting at the head table alongside Dr. Antoine “announced that it was high time for the business sector and business leaders in Grenada to become involved in politics because they had a stake in the development of Grenada.”

According to Edwin, he is not opposed to that notion but from what he has seen from Steele as Minister of Health in the Covid-19 era, he is convinced that this senior minister is more concerned with making decisions on the pandemic more in the interest of business and not the working class in the country.

The attorney said: “Nickolas Steele has been given the most important job at this time – he has the most important ministerial post – that is to safeguard the health, the lives of the people of Grenada. I don’t think that there can be any doubt of the role of a Minister of Health while a pandemic and its deadly variant rages. His failure to carry out that job has been spectacular”.

According to Attorney Edwin, the evidence is clear since at a time when the Health Minister should be looking to buttress the health sector and its institutions in the face of a worsening Covid-19 crisis he was seen in public going round with a business investor with an interest in the Theatre Arts.

He recalled that Grenada was closed down just over a year ago when there was only one death from Covid-19 but in the face of massive deaths in recent weeks and cries from the business community over loss of money into their coffers, the country continues to remain open to face the brunt of the pandemic.

He said it is now clear to him that Minister Steele has been able to define for himself whose interest to support in the current pandemic.

“Unfortunately and it is clear to every school child in Grenada that the Minister of Health has weighted in favour of the business sector – he has chosen livelihood over lives.

“I am saying with a heavy heart that because of the failure of the Minister of Health to act to protect the lives of Grenadians when we knew that if you open up the country, if you invite the SGU (St George’s University) students, knowing what you know about asymptomatic person who can carry the Delta variant, it was almost a certainty that the Covid virus would explode in Grenada and indeed it has.

Edwin stressed that Minister Steele’s focus on the job was more on the loss of earnings of the business sector that he represents as a member of the Cabinet of Ministers.

“…..As a Minister of Health if we are to grade him, he will get a minus zero,” he remarked.

He said that Steele had the opportunity when Grenada was locked down over a year ago to prepare and prevent “the explosion of deaths that we have seen on our island.”

He pointed out that the deaths are alarming and almost every Grenadian is now living in fear as Minister Steele and the NNP regime that is running the country did not prepare the nation for what was coming with the pandemic.

Edwin charged that the question which Grenadians are forced to ask is what steps were taken by those in authority to protect the country in deciding to re-open the country for business.

He said that apparently nothing was done including exploring the possibilities of bringing in Field Hospitals, as well as modernising and upgrading the many and various health centres throughout each parish on the island.

“There was no mention of stocking up on masks, sending out healthcare packages, no mention of the precautionary steps to be taken in the fight against the deadly virus”.

The attorney suggested that the recent supplemental budget passed in Parliament by the Mitchell-led regime should have been dedicated solely to the Health Sector to buttress the island from the Covid-19 onslaught seen in recent weeks.

Edwin also ripped into Minister Steele as one who gave Grenada the dubious record among 200 countries in the world where the job of Minister of Health is given to someone who is described as “a chain smoker” in several quarters.

“No other country has a Health Minister who is a smoker,” he told THE NEW TODAY.

“Nicholas Steele, therefore, is the wrong messenger to tell Grenadians be healthy. It turns logic on its head how we could make a smoker our Minister of Health.

“Our lungs are the most vulnerable part of our body to the deadly Covid-19 virus and its variants. Nikki Steele does not care about his own lungs and his own health – why would anyone listen to him,” he said.

Edwin attacked what he said was “the lack of a policy” put in place by the Minister of Health to tackle Covid-19 on the island.

“We desperately need a capable person to lead that Ministry,” he said.

Edwin called for an upgrade of the badly under-staffed medical stations throughout Grenada in this particular period of Covid-19.

He said that Minister Steele should have been fighting in the recent Supplemental Budget passed in Parliament for an increase in allocations to make the health centres around the island become more efficient and better prepared to deal with the crisis on hand.

The outspoken lawyer also slammed Minister Steele over his recent announcement that an Ethics Committee will be set up in order to determine who will or will not get treatment at the island’s hospitals in the coronavirus pandemic.

“I prefer to call it a Death Committee,” he told THE NEW TODAY.

He said it was astounding that Steele and the Committee “will decide who will be provided with medical assistance at the General Hospital and who will be turned away.”

“We need to abandon any talk of making a decision about who should live and who should die from any so-called badly named Ethics Committee.

“If there was ever a time for our Prime Minister to be decisive it is now. The Prime Minister that I know would not stand by and see the ordinary man and woman’s life, the poor being sacrificed in this way on the chopping block of business interest over the life of the poor.

PM Mitchell is said to have travelled overseas just over a month ago allegedly to conduct his annual health check-up.