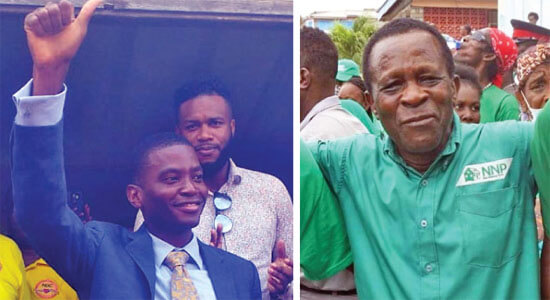 Dickon Mitchell (l) – is leading Congress into the battle on June 23; Prime Minister Mitchell (r) – seeking to bow out in a blaze of glory

The Grenada Prime Minister, Dr. Keith Mitchell is calling it “one for the road” as he signed nomination papers Wednesday to contest what he has repeatedly said will be his final battle in electoral politics in his St George North-west constituency that he has represented in Parliament since 1984.

Within minutes of exiting the small Parliamentary Elections Office in his constituency after his appointment with the Registration Officer, the 75-year old Grenadian leader told reporters that the many well-wishers who accompanied him on this final journey to the office in Happy Hill really touched him.

He said the message that came home to him is “the love and deep appreciation of the people of North-west” for their leader who is now the longest serving Prime Minister in the history of Grenada, Carriacou & Petite Martinique.

“I never expected to see that crowd – I thought we would have about 20 to 30 people going with me which is what we had the last time but there is a mood in the country now which is stronger than we had ever seen,” he told reporters.

“I think that people understand the importance of this election and that is why you see them coming out in such large numbers, so I’m elated,” said the Prime Minister who is facing a challenge from Jonathan La Crette of the National Democratic Congress (NDC).

Although the Prime Minister had indicated in every election since 2008 that it was to be his final one, he insisted that the June 23 poll will be his final and he would definitely bow out from frontline politics.

“Some people get the impression as if I am going away or something, I’m disappearing. If God spares me and give me the strength that he has given me so far I will be there to support and advice and work with the new leadership of the New National Party.”

Dr. Mitchell indicated that he had not started to focus his mind on a possible successor for the ruling party.

“No, no, not really. It should not be me by myself. I will be involved in the process but I believe that the people must have a very important say,” he said.

According to PM Mitchell, there are several persons under consideration for the leadership of the NNP including his own St. George North-west constituency.

“My own view is that we’re not only looking inside at those who are representing government right now but outside – somebody from the outside may emerge, you never know,” he said.

“All persons have an opportunity but this is about the future of this country – it’s not just about me,” he added.

Speculation is rife that the NNP is looking at the UK-based attorney-at-law, Akima Paul-Lambert as the person most suitable to replace Dr. Mitchell.

THE NEW TODAY understands that Paul-Lambert has been invited by the NNP to make an appearance on the platform during the 2022 campaign.

Long-standing Deputy Political Leader and Finance Minister Gregory Bowen is said to not be on the list of potential successors due to his age which leaves Education Minister Emmalin Pierre and Agriculture Minister, Peter David, a former member of the Congress party, as the main contenders.

According to Dr. Mitchell, he is “extremely confident” that the NNP will again sweep the polls on Election Day.

The following release was issued by the Electoral Office on the list of persons who filed Nomination papers for the upcoming general election:

At the close of nomination today, forty-one (41) individuals were nominated as candidates for the General Elections of June 23, 2022 in Grenada, Carriacou and Petite Martinique.