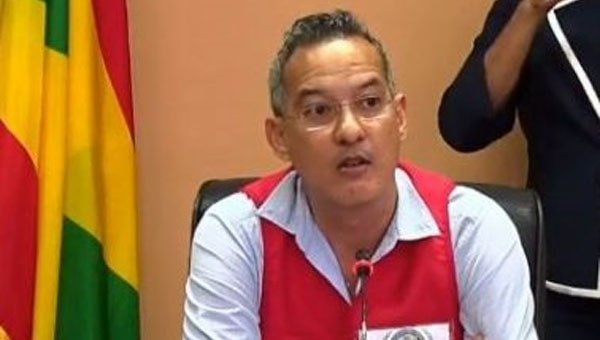 More than a month after Grenada closed its borders to passenger arrivals, the country has recorded another case of COVID-19 from an imported source.

Health Minister Nickolas Steele announced Saturday that there are three new cases, bringing the total number of positive cases to 18.

Two of the latest cases are related to possible community spread of the virus, while the third, a 50 year-old woman, flew into the island on March 16, five days before Grenada shut its borders to commercial passenger air traffic.

In an exclusive interview after the press briefing, Minister Steele disclosed that the woman was among three people who arrived on the same flight and are living in the same household in an apartment building.

The woman tested positive more than a month after arriving in Grenada. At the time of the Minister’s announcement of the case Saturday afternoon, 38 days had elapsed since the woman arrived in Grenada.

Based on World Health Organisation (WHO) guidelines, people who arrived from countries affected by the virus were ordered to spend 14 days in self-quarantine.

However, this new case was discovered well after the 14 days had elapsed, raising questions about the effectiveness of this means of containment for COVID-19.

The woman and her two companions volunteered to be tested, according to the Health Minister and it was discovered that all three had been infected.

They had not reported any symptoms to health officials before that. Test results for two of them showed that they had the virus at some point, while the third showed an active infection.

According to what is known about the novel coronavirus it takes about three to nine days for an infected person to develop the viral load – the amount of the virus in a person’s body – to be detected by a laboratory tests.

However, while the most typical route of transmission is through a person who displays symptoms, infection can also occur prior to symptoms developing.

Based on the timeline, this latest import-related case went unnoticed by health officials for at least a month as it is not clear exactly when the virus was transmitted among the three people.

“What we are calculating is that one of them had it and then gave it to the others. They had it and no longer have it,” he said, referring to the two who have been cleared.

The Health Minister said they had been in self-quarantine, though he did admit that they had been out in public and were not displaying symptoms.

“They are the kind of people who would adhere to quarantine. They volunteered to be tested and wore their masks in public.

Minister Steele said the surveillance team is conducting contact tracing based on information given regarding their movement.

Currently, confirmed cases of the virus are in three of the seven parishes in Grenada.