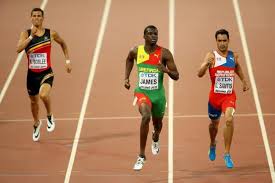 Grenada’s 2012 Olympic 400 metre champion Kirani James says he is continuing to make a full recovery from graves diseaseand is eyeing belated start to his 2019 season. 26 year old James has been hampered by the disease, caused by an overactive thyroid gland since 2017 and has competed sparingly since then as he continues to receive treatment.

James who is also the 2011 world 400 meter champion last competed at the Jamaica International Invitational last year when clocked an encouraging 44.35 seconds to win. The former world youth and world junior 400 metre champion is yet to compete this season but says that is also on track.