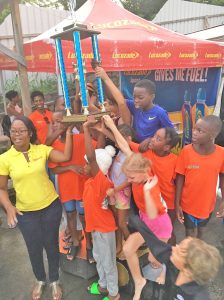 After 4 days of nail biting competition, Grenfin Swim Club managed to regain the championship title, which slipped away in 2018.

The annual Grenfin Invitational Meet is used as Trials event for the selection of the National Team members who will represent Grenada at the OECS Championships scheduled for November 7-10 in St Vincent.

The Grenfin Invitational was keenly contested by the second major swim club in Grenada, Sailfish.

While Sailfish has shown tremendous improvement over the past few years at the end Grenfin prevailed as champion with 2032 points followed by Sailfish with 1969 points.

The ongoing strengthening of the base of swimmers in Grenada supports the growth and development of a strong cadre of swimmers with potential to represent Grenada nationally.

While welcoming sponsor, George F. Huggins with the brand Lucozade, President of Grenfin, Dwayne Gellineau noted that over the past three years we have seen upsurge of interest in the sport of swimming both from within the swimming fraternity and the general public, noting this continues to speak well for the development of the sport.

President of GASA, Peron Johnson, welcomed the increased level of competition and participation in the sport, saying that given the size of Grenada, she looks forward to the day when the island will compete as one large club divided into houses similar to the school based competition structure.

At the end of the weekend, the following individuals emerged as age group champions: 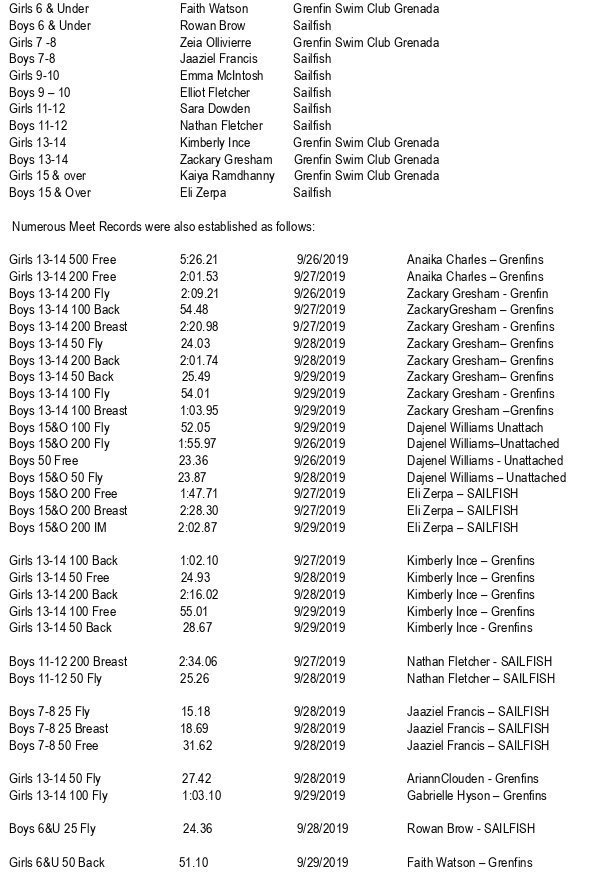 The Technical Committee of GASA will meet shortly to review the result of the just concluded meet to evaluate individual swimmers and name the potential 34 member team which will represent Grenada in November at the OECS Swimming Championships.