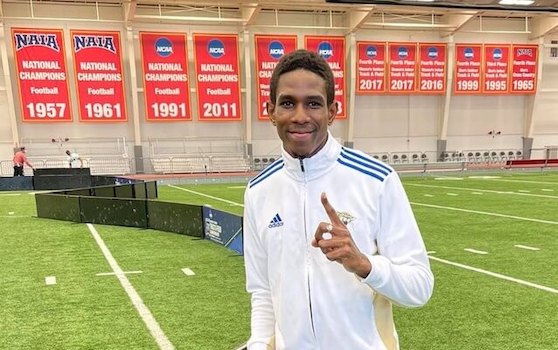 Gamali Felix – might be following in the footsteps of Kirani James

Another 400 meter runner from Grenada is making a name for himself in the United States.

Grenadian Athlete Gamali Felix ran a Lifetime Best of 46.63 seconds on March 6 in the United States to become the 2021 NJCAA National Indoor Champion in the Men’s 400m.

He returned to the track later to anchor his Barton Community College team to win Gold in the 4x400m Relay.

Felix is believed to be the first athlete from the Spice Isle to win the Men’s 400M at this track meet in the United States.

Others like Rondell Bartholomew and the now disgraced Bralon Taplin did compete in the event but never won the race.

Gamali is former student of the Grenada Boys’ Secondary School and represented Grenada on two occasions at the Carifta Games where he won a Silver Medal in Triple Jump in 2016.

Before leaving for the US, he trained with the South City Rising Stars Track Club under the guidance of Head Coach, Lee Cuffie which is based at Tanteen in St. George.

The athlete is the son of Martin Felix, a senior public officer who once worked at the Customs Department as a Supervisor.