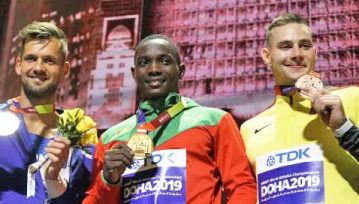 Grenada’s Anderson Peters pulled off a shock win in the javelin at the world athletics championships on Sunday after an unpredictable event where Olympic champion Thomas Rohler failed to reach the final.

Peters won with a throw of 86.89 as he gave the tiny Caribbean nation their second-ever world championship gold, following Kirani James’ 400 meters win in 2011 – an event which inspired him to take up athletics.

However, he did not have much time to celebrate – the 21-year-old studies at Mississippi state university and told reporters he had to sit exams next week.

“I’ve definitely missed some classes, I have a test on Tuesday,” Peters said.

Estonia’s Magnus Kirt was second with 86.21 although he retired from the competition after appearing to injure his shoulder with his fifth throw.

Kirt was wheeled off the field and unable to do a lap of honor although he took part in the medal ceremony with his arm in a sling.

Peters said he was inspired by watching James’ performance in Daegu, South Korea, eight years ago.

“That was unbelievable for the whole country,” he explained. “He showed it’s possible for anyone to become a world champion.”

Peters said he was “shaking with nerves” during qualifying.

“I was so scared but having made the final I was a different guy today, I went out to be the world champion and here I am,” he said. “It means a lot to me and I’m sure it means a lot to my country.”

“I always wanted to be a sprinter but I kept getting injuries, so my coach and I decided to try another event and we chose javelin and it turned out that I was pretty good at it,” he added.

Germany, who had been expected to dominate the competition, instead had to settle for a bronze with defending champion Johannes Vetter who threw 85.37 after an injury-plagued season.