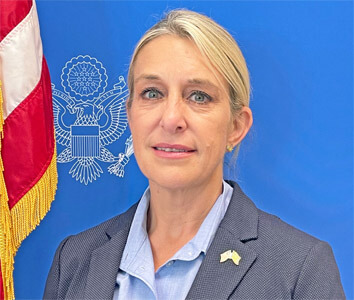 “I am thrilled to be in Grenada and back in the Caribbean. I am honored to represent the United States in this important relationship. We have a long history and incredibly close people-to-people ties,” Principal Officer Herrera said.

“I look forward to working with the government and our partners to face new challenges, expand bilateral trade and investment, and promote democratic freedoms and good governance.”

She also served as Regional Director for the Office of Foreign Missions-Miami Office and Special Assistant to the Chief of Mission at the U.S. Embassy in Baghdad, Iraq.

A career member of the Foreign Service, she has also been posted at the U.S. Consulate General in Ciudad Juarez, Mexico and U.S. Embassies in Kuwait and Germany.

“I thank Karl for his remarkable leadership and for the outstanding work he has done to promote our close partnership with Grenada,” Principal Officer Herrera said.

“I look forward to working closely with the people of Grenada, Carriacou, and Petite Martinique to further strengthen our ties as enduring neighbors, partners, and friends.”