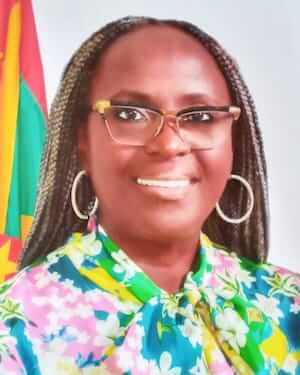 Sen. Rolanda Mc Queen – appointed to serve in the Upper House of Parliament by the Leader of the Opposition
As a Senator who represents the people of Grenada I would like to call on the Hon. Nickolas Steele, Minister for Health, to release and make public the CCTV footage recorded at the arrivals lounge of the Maurice Bishop International Airport on the 11th of August.

I was appalled to observe the conditions under which our Grenadian frontline workers are being made to operate in the midst of a pandemic. I have written to the Minister for Health to request that the footage be made public in the interest of transparency and accountability.

My first concern, after arriving at the MBIA on a British Airways flight, was for the young lady and the young man sitting at a desk, with passengers speaking over them with what, in my view, was inadequate protective gear. I commented on this to them and suggested that they should be better equipped to be on the frontline, as they were.

While I was present I did not observe them changing the gloves which they wore, or sanitising and they appear to be overwhelmed by the task at hand which was to process documents from the arriving passengers. After giving my information at about 3:30 p.m., I was directed to a sitting area and sat next to a gentleman who was next to me.

A male health worker then informed him that he should remain sitting as there were no more swabs but that there were some on its way. Overhearing this, I introduced myself and asked the gentleman if I heard him correctly. He then invited me to have a private conversation and at that time admitted that they had in fact run out of swabs.

I inquired about the length of time it would take to remedy the situation and he informed me that they had sent to SGU to get some. He was calm and very professional as I sat behind the screen waiting.

As I was waiting I had time to observe the facilities at the screening and swabbing area and I noticed that there was no facility for handwashing for the health workers and that there was only a small bottle of sanitiser in their work area and one or two office bins underneath a table which were filled to capacity and overflowing.

One nurse went to a bin and used her gloved hand to press the waste further in. One of the workers went to the VIP section and got a PCR swab which was used on me at 3.49. At 4.47 I was still at the arrival lounge and by 5:08 p.m. I cleared Customs and Immigration testing had not resumed.

I did not hear any announcement to the passengers as reported. From the airport to St Paul’s, according to Google, is approximately 21 minutes. Minister Steele said it took 21 minutes from one room to the next inside of the airport to get the PCR swabs. Mr. Steele, I believe, gave this timeline because he looked at the video and observed the time that I was swabbed and the time I exited, cutting it just close enough to seek to downplay the crisis which occurred at the MBIA.

I am not trying to get into the limelight, as the Minister inappropriately suggested in a government news conference on Tuesday.

At my first sitting of the Upper House, Grenadians were mocked and called stupid and suggestions were made that those who oppose vaccination and disseminate information in that light should be charged with treason.

The Minister himself, speaking at a sitting of the Lower House, also said that people will die; that COVID-19 “would have its day”, because of low vaccination rates.

I am appointed to represent every Grenadian and not a chosen few, I want to be known for my courage and confidence The Minister said he leaves it up to the public to judge my utterances regarding the crisis at the MBIA and I call on him to release the footage so that it can inform this public judgement.

Never have I stated that the visitors did not get swabbed and at no time did I criticise the professionalism of the hard working health workers or the airport staff. I have stated publicly that it’s a shame that the health workers and airport staff did not have the time to do their jobs, probably because they were not properly equipped. I have said that health officials are putting them and their families and the Grenadian public at risk.

The Minister described me as a newly arrived Parliamentarian trying to get into the public limelight and trying to make a name for myself. My family and friends describe me as a tea bag. You never know how strong I am until I get in hot water with both eyes open. I’m doing the job that I was appointed to do and I am not afraid of victimisation. I have a recording of the event that took place at the airport that I have released today with my statement.

As a politician one needs the ability to anticipate what is going to happen tomorrow, next week, next month and next year and to also have the ability to explain why it didn’t happen. I believe the Minister of Health and his senior team members still owe the people of Grenada a proper explanation on this issue since he failed to do so when asked by reporters and instead chose to adopt a “shoot the messenger” attitude.

I am also imploring the Minister of Health to please shut down the country for a week so that we can properly take control of this current outbreak that was confirmed on Tuesday. Health officials have stated that there are 40, 000 kits on the island, nearly enough to swab 1 person in each household in Grenada. I am asking him to embark on mass testing, at no cost to the public as not every Grenadian can afford $405.00, so we can control the spread of this deadly virus.