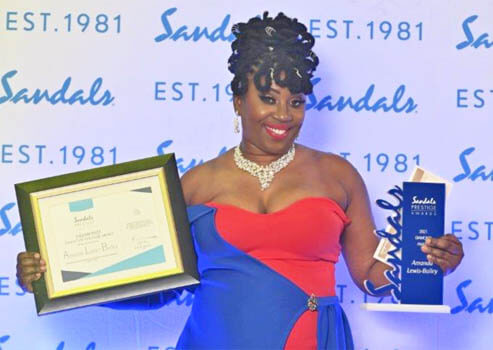 Amanda Lewis-Bailey-Diamond Team Member of the Year
For the first time in two years, the island’s top Luxury Included® resort held its Annual Prestige Awards acknowledging outstanding team member performance in 2021. In his address to the audience, General Manager, Peter Fraser shared, “We have persevered through a most tumultuous time. Tonight is about you, those who have persevered and continue to do so, making your contribution honestly and with pride. Let us look onward and upward to the future.”

Topping the list as the Diamond Team Member of the Year was restaurant server, Amanda Lewis-Bailey. On the heels of her win, the seasoned Sandals team member, shared, “This is my first time winning something of this magnitude and it feels so good. Thank you to everyone who helped me along the journey; and to my fellow team members, keep doing your best, every day. Be willing to go the extra mile and it will be worth it.”

Holding a close second, receiving the Platinum Award was the most outstanding butler, Don Cyrus.

The highly coveted department of the year was won by the Stewarding department. Further, the top salesperson, receiving the Money Maker Award was resort photographer, Diron Gill. Also leading sales, but of tours was, recipient of the Island Routes Ambassador Award, Marvin Chase.

The star of behind- the-scenes operations, receiving the Heart of the House Award was laundry attendant, Cassandra Reuben. Also making her mark among fellow team members was the recipient of the Circle of Joy Award, cook, Natashia Edwards- Charles.

Equally popular and respected, arising as the People’s Choice was spa attendant, Rockey Peters. Also from the spa, assistant manager, Claudian Marrast won the All Rounder Award for bridging the link between team members and management.

Leading in the area of environmental protection and safety was Landscaping Supervisor, Dylon Alexander, recipient of the Earth Guardian Award. From the water sports department, attendant, Sinatra Frederick proved to exhibit the most community spirit copping the Sandals Foundation Sentinel Award.

The guests’ favourite, as determined by guest surveys and social media tracking, was dining room server, Nolyn Dickson. With a keen eye for detail and maintenance of standards and controls, the recipient of the financial controller’s special award, the Standing Ovation, was Tivon James, Senior Cost Control Clerk.

Another star of the night, as selected by the General Manager and Executive Committee was the MVP or Manager of the Year, Alifa St. Paul, Environment, Health & Safety Manager.