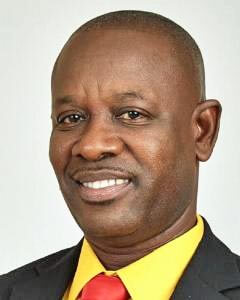 Adrian “Persuader” Thomas - NDC’s Acting Party Leader
The National Democratic Congress is in full solidarity with the President and Members of the Grenada Union of Teachers on the issue of the 4% salary increase that is contractually due to them, negotiated since 2017.

The detention and interrogation, for over 3 hours, of GUT President, Mr. Jude Bartholomew, is not taken lightly. It is a clear indication of the dangerous direction Keith Mitchell and his NNP are headed, in its quest to silence the few Grenadians who stand up and fight against this dictatorial regime. Those who orchestrated the detention and interrogation of Mr. Bartholomew, over the recent protests by the Teachers, must take note of the overwhelming voices of dissent from among ordinary Grenadians, and check themselves.

This administration is hell bent on using the Covid19 protocols to stifle the will of the workers, as they protest for what is rightfully theirs.  The teachers’ protests have become the soft target for police harassment, while other large gatherings are allowed, sometimes with full support of the authorities. We have seen this playbook before and the NDC stand ready to lead the fight against the oppression, victimization and violation of the rights of our people.

The presence of the TUC, TAWU, PWU and CIWU at the impromptu demonstration sent a strong message, that the Unions are united, that they understand the struggle that they are engaged in and that they will not back down. Acting Party Leader Adrian Thomas and other members of the NDC were on the scene, signaling our party’s unwavering solidarity with the workers of Grenada.

This intimidation and harassment of our upstanding citizens who dare to exercise their guaranteed rights, fall squarely on the shoulders of the Minister of National Security, Prime Minister Mitchell.  We applaud the GUT President, who made it clear that they are not afraid, they will not be daunted, they will fight for their 4%, increment and that, as far as the teachers are concerned, the action taken by the State against the teachers is like an ant nest that has been raised.

The NDC condemns this barbaric act against our brothers and sisters in the teaching fraternity. Our teachers deserve to be treated much better. Teachers and workers in Grenada Carriacou and Petite Martinique are the real producers and contributors to our Country’s development, and must be appreciated.

We therefore call on the Prime Minister to atone for this cowardly act of victimization by: