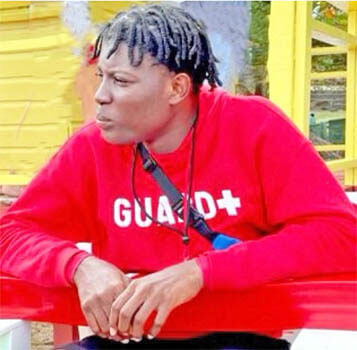 Andrew Fleming from River Salle
On Saturday morning, May 14th, while a man from Mt. Rose was bathing in the sea at Bathway Beach, he was pushed out to sea toward the breakwater rocks and was unable to get back to shore.

He struggled and clung to the rocks and was spotted by the lifeguard, Andrew Fleming, from River Salle.

The young lifeguard rushed out to sea to make the rescue and brought the semi-conscious man to shore and put him in the recovery position while emergency services were contacted.

He was eventually released to his brother who took him to the medical clinic for assessment of possible dry drowning.

Dry drowning can occur when an individual inhales water when in a panicked situation. An individual’s windpipe muscles could close to protect them and large amounts of water can go into the stomach.

Andrew Fleming stated he had his eyes on the gentleman and when he realized the man was in distress, immediately entered the water. Lovell Alexander, his supervisor, commended Andrew on his actions.

He stated, “Andrew began working for Grenada Lifeguards in January and he put his recent training into action with a swift and competent rescue using the tubes the lifeguards always carry.

Most of our work is preventative, but this was a serious rescue in which the man was saved from a probable death.” Lovell followed up with the older gentleman, Randolph Alexander, on Sunday and he expressed many thanks to the Lifeguards for saving his life.