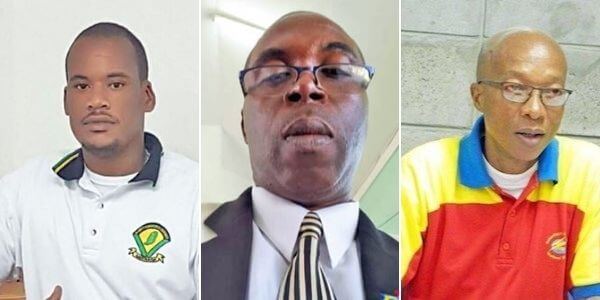 (L-R) Brian Grimes - President of PWU; Jude Bartholomew - President of GUT; Andre Lewis - President of TAWU
Firstly, the membership of the unions takes this opportunity to publicly express their profound appreciation to their legal team led by James Bristol Q.C., with former Attorney General Cajeton Hood and Ruggles Ferguson and other legal minds that worked behind the scene; for their stalwart, unselfish and tireless work to bring about this victory at the High Court.

In noting the written statement that was hurriedly put out by the Government Information Service yesterday, membership of the unions views, with grave caution and concern, the Government’s expressed “commitment to doing right by every sector of the national community”. This is so especially in light of the claim that the “lack of a pension scheme for public sector workers has been in contention for a generation and has been inherited by this and previous governments”.

Except for the period July 2008 to February 2013, the current administration has been in office since July 1995 and despite many concessions by public sector workers, the negotiated settlement of the pension matter that was agreed during the tenure of former Attorney General Cajeton Hood was abandoned, and promises made and agreements signed just before elections in 2018 have not been honored. Rather, salaries of public sector workers were unlawfully docked during the Christmas period in 2018 when industrial action was taken regarding the same issue of pension. Despite many attempts at reaching an amicable settlement of this issue Government has so far failed or refused to return the sums deducted.

The union membership is unaware of any “complex issue regarding pension for public sector workers”, given that the High Court has declared that the clear pension laws that existed before Independence are still in force. These laws are just as clear as the laws upon which members of Parliament and others now rely to receive pensions paid from the Consolidated Fund. The High Court has ruled that the law which was relied upon to deny the application of the clear pension laws to public sector workers violates the constitutional rights of the workers. The statement from the government shows that the current administration clearly understands that, since the decision in McQueen in 1998 which was under this very administration, the regional courts were of the view that it was unconstitutional to prevent public sector workers from relying on the statutory pension scheme.

The union membership gives its solemn commitment to work with this and any subsequent administration to ensure that the rights of workers are reinstated forthwith and in a manner that is fair and sustainable, and not injurious to the economy of Grenada as a whole. However, we insist that there must be an immediate and unequivocal acceptance by the current administration regarding the state of the law as declared by the Court, and that the right of workers to rely upon our pension laws be confirmed and reaffirmed by this administration.

The union membership trusts in the independence of the Judiciary as the third arm of the State of Grenada and looks forward to the implementation of lawful pension for all public sector workers.