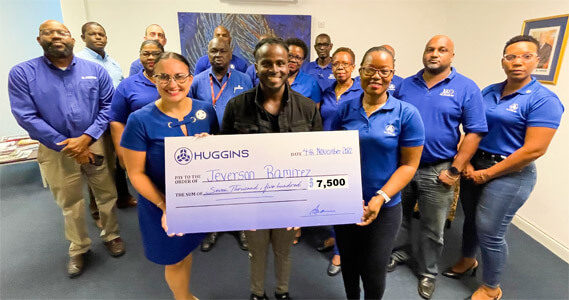 Jeverson Ramirez, one of Grenada’s most dynamic singers and musical talents is back in Grenada for his first headline solo concert. The highly anticipated event is scheduled for Saturday, November 12th at Pier 57 and is being presented by George F. Huggins and Company Grenada Limited.

“Huggins”, as the company is often locally referred to, is one of the largest private corporations in Grenada and is proudly 100% Grenadian owned. It also is well-known for its support of Grenadian culture and sports.

Ramirez, who left Grenada last year, has been based in Nashville, Tennessee, where he has been focused on writing and performing music. The young Grenadian singer has been quickly gaining regional and international recognition, for his recently released EP, ‘Something in the Water’, which includes the single ‘Move’ which was featured in a Johnston & Murphy ad campaign.

He has been booked on several US music festivals and private events, and appeared on ‘Good Day New York’, a television morning program aired throughout the New York and tri-state area. He was the featured half-time act during a Brooklyn Nets game at the Barclay’s Center and at the Mercedes Benz Stadium. Jeverson was named by People Magazine, as one of twenty artists to look out for in 2022.

Mrs. Anya Chow Chung, CEO of Huggins said, “It is a joy to support and be a part of this project, and we are excited to witness Jeverson’s first local concert as the marquee act. He is an amazing performer and musical talent and we, as Grenadians, have been extremely privileged to have had a front-row seat to witness his growth and development as an artist.

Huggins is proud to be the presenting sponsor of his inaugural show in Grenada and we look forward to much more from him in the future. The Huggins family wishes him continued success and will support him in whatever way we can.”