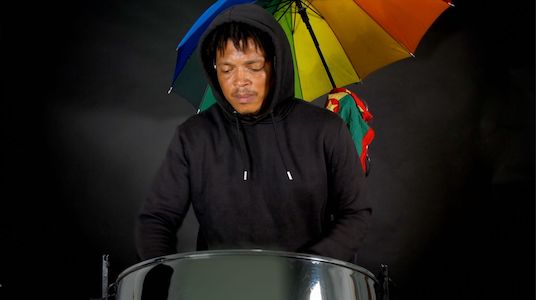 Mikiel Smith
The semifinals of the highly anticipated PanoGrama virtual steelpan competition aired promptly at 8pm on May 29 and offered a wide array of musical selections for viewers. From the 20 pannists representing eight countries – USA, France, Canada, Antigua and Barbuda, Belize, St. Lucia, T&T and Grenada – 10 advanced to the final. Lone Grenadian Mikiel Smith stormed into the final with an energetic rendition of Designer’s Pan by Storm.

Strong melodies of the official PanoGrama anthem filled the YouTube stream to get the event started, before host and founder of PanoGrama, Nevin Roach, invited Councillor Tashia Burris, Secretary of Tourism, Culture, Antiquities and Transportation at the Tobago House of Assembly to deliver opening remarks.

Hailing from St. Pauls, Smith took to the virtual stage as the 18th performer for the night. He appeared on screen clad in a black jacket with an umbrella in the backdrop, indicating that he was prepared for the turbulent weather he was about to unleash musically. No time was wasted in setting the tone for the performance, as the clapping of thunder and rapidly played notes introduced the classic selection, Pan by Storm. He maintained the mood from start to end much to the delight of the audience.

Smith shared in an interview that “Pan by Storm is a popular song in the pan world that I always wanted to perform. I missed out on the finals last year, so I took no chances this year. I put a lot into the semis performance. There was more preparation this year both musically and otherwise, and I am very happy that the judges gave me the nod. I would also like to thank the organisers of PanoGrama for hosting this wonderful event and I hope to see more Grenadians participate in the future.”

Throughout the semifinals, selections ranged from Mariage d’Armour by Paul Senneville to Bob Marley’s Could You Be Loved and colourful costumes were worn by each pannist. Shaquille ‘Flogo’ Forbes of T&T finished the night in the top spot with Chick Corea’s Spain, followed by France’s Mathieu Borgne who delivered sweet music with Lord Kitchener’s Sour Apple. USA’s David Yundi completed the top 3 with his version of Feel the Love by Free Town Collective and DJ Private Ryan, while Smith finished 10th.

Pannists will be required to select and arrange a new tune for the finals, and Mikiel Smith intends to represent Grenada with merit. He will have to impress adjudicators Professor Liam Teague, Dr. Mia Gormandy-Benjamin and Adjunct Professor Victor Provost, to maximize on points for his introduction and ending, variations, execution, and performance.

All finalists will compete for a grand prize of an all-expenses-paid trip to the Bahamas courtesy the Ministry of Youth, Sports and Culture – Bahamas, a Perfect Steel tenor pan and case, $1,000 USD and a private session with a world-renowned steelpannist. The finals will take place on June 12 and persons interested can join the mailing list on pano-grama.com to receive links to watch the show.

The results for the top 10 were as follows: