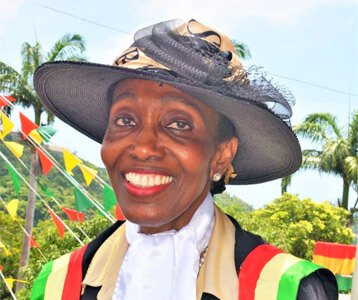 You can‘t transform Grenada if it is (just) a matter of legislative behaviour, so inviting people to take ownership, present yourself for retraining, as an investor at whatever the scale, a domestic Grenadian investor to expand the economy, present ourselves as stewards of the environment, as economic transformation actors, and I really think that it is teamwork, and those in institutions, starting with the legislators, as well as those in homes, communities, and organisations, we have to work together.

That’s according to the newly appointed President in the Upper House of Parliament, Senator Dr. Dessima Williams, as she reacted to the proposed measures outlined in the Throne Speech that will guide and support the transformative agenda of the new Congress government of Prime Minister Dickon Mitchell, which won the June 23 General Elections to unseat the incumbent Prime Minister Dr. Keith Mitchell, who now serves as Opposition Leader in the Lower House of Parliament.

Dr. Williams issued a clarion call for the nation’s youth to put forward their skills and talents and make their contribution to the national transformation agenda, during a live interview broadcast on the Government Information Service (GIS) following last week Wednesday’s delivery of the traditional Speech by Governor-General Dame Cecile La Grenade at the opening of the Eleventh Session of Parliament.

According to the Throne Speech, the priorities for the first year of the National Democratic Congress (NDC) government are intended to be “results-oriented, focusing on the implementation of strategic programmes, projects, and policies to gain the maximum benefits from the resources that are available” as the “government seeks “to combat poverty, foster a sense of pride in our heritage and natural resources, and assume our rightful place among the community of nations.”

“I am inviting you young people to come forward and work with us to expand your pride, to feel as though you are acknowledged, and to make this just a smashing island nation second to none,” urged Dr. Williams, who also expressed the view that students who are finishing school at both the secondary and tertiary levels “are bright, and are ready to build Grenada.”

Sharing her anticipation of the debate to take place under her watch in the Upper House, which fulfills its role as the legislative arm of the Government by scrutinising bills, and debating legislation before it can become law, Dr. Williams reflected on a visit to the Town of Grenville, St. Andrew only the day before, where she observed that there are “too much poor people, too much informal sector, (and) too much people begging or uncertain.”

“We have to change that, and I am pleased that the Throne speech prioritised that, speaking about a new direction, of transformation, lifting the bottom, propelling the youth, caring for the vulnerable, the elderly, and the challenged…,” Dr. Williams added.

“Citizen Empowerment” is among the five (5) overarching pillars that will drive the government’s transformative agenda, which focuses on the “holistic development of our people, ensuring that they are equipped, and able to produce and deliver new and improved goods and services, utilising modern methods and techniques, and generating new sources of employment to income,” as outlined in the Throne Speech, along with the other four (4) pillars, Economic Transformation, Governance, and Institutional Rebuilding Environmental Management and Foreign policy.”

With over 50% of the population aged 18 to 35, the Throne Speech identified youth as playing an integral part in national development, providing significant contributions to a growing labour force, with plans to invest in training and development opportunities and, fostering an environment where youth have access to the support and facilities needed to break the cycle of unemployment and poverty, in addition to the core ongoing social programmes.

The focus of the government’s proposed legislative agenda for the upcoming period as outlined by the Governor-General includes “Digital Transformation, Natural Resource Preservation, Renewable Energy, Urban Planning and Labour Relations,” under the theme “Transformative development towards a sustainable equitable and prosperous Grenada,”

This theme is aligned with ‘Vision 2035,’ which was an undertaking of the former Keith Mitchell regime under the theme: “Grenada, a resilient and prosperous nation, with a conscious and caring citizenry, promoting human dignity and realising its full potential through sustainable economic social, and an environmental progress for all.”

“I was very fortunate this morning, in taking the official photograph of the new session to be seated next to an old friend (Opposition Leader, and former Prime Minister) Keith Mitchell with whom I have agreed, and disagreed…and we agreed that we are going to work together, parties have their own identity and their agenda but this is about moving Grenada (forward) under the 2035 sustainable development programme that his administration started (and) this administration has bought into, and I think it is forward sailing,” Dr. Williams remarked.

The female senate president previously served as Grenada’s Ambassador to the United Nations from 2009 to 2013 and as the Chair of the Alliance of Small Island Developing States (AOSIS) leading a 44-island global climate-change effort through climate change negotiations.

She is also the founder and Director of the Grenada Education and Development Programme (GRENED), which works with rural, school-aged girls and boys and supports them as emerging leaders.

Dr. Williams said, while the parliamentary post is new ground, she is in learning mode, noting that with the experience gained at the helm of the AOSIS, she “has a sense of managing the politics of diversity” and she “will be guided by the rules” that govern the Upper House.

“There are also persons including the outgoing Senator (Chester Humphrey) who has been very generous, and has offered his expertise…,” she added.

“I am standing on their shoulders, and I pray that others will stand on my shoulder,” Dr. Williams remarked.