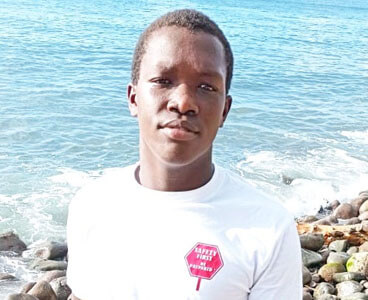 Vieondi Richards is thirteen years old and already has the distinction of having saved someone’s life.

The St. Rose Modern Secondary School student was having an ordinary day swimming on the ‘Lance’ in Gouyave, St John on November 8, when he saw another child in distress and quickly moved into action to save her life.

The eight year old girl, known in the community as ‘Tata’, had gone to the beach with another child, was dragged out to sea by a large wave and was drowning.

She is the cousin of Olympic champion Kirani James and daughter of homicide victim, Lennon Marshall, a workboat regatta champion, who was killed last December in Gouyave.

The teenage boy explained that at first he did not think she was in trouble and assumed that she was able to swim but after a while he noticed that she was face down in the water and not moving and realised that she needed to be rescued.

“I saw her frothing up so I went and grabbed her and brought her ashore,” the boy told THE NEW TODAY.

Asked if he was not afraid, he responded, “No I wasn’t afraid because I am a really good swimmer”.

An adult who was also swimming on the ‘Lance’ with his wife performed CPR on the child and she was taken to the St. George’s General Hospital.

After being discharged from hospital, the 8-year old visited Vieondi with her mother to say thanks for saving her life.

She explained to his mother that she could not swim and a wave threw her out further than was safe for her.

Like many children in the town of Gouyave, Vieondi grew up as one with the sea, swimming regularly even when the waves are rough.

He is also a member of the Safety Club, a group based at the St John’s Anglican School, where the members are taught water safety, First Aid, fire safety and cyber safety among other things.

Natasha James-Munro, who is the teacher in charge of the Safety Club and a trainer for USAID in disaster preparedness and safety called his actions heroic.

“I think that is a heroic act that needs due recognition. I heard about the incident but I did not realise it was Vieondi.

“Great job for his age to go out and retrieve her body from the water that is remarkable and if he did not retrieve her body, she would have been dead. I think that needs national recognition.”

James-Munro recalled an incident which took place while she was in Trinidad conducting safety training where a four year old boy saved lives when a car went over an embankment and received the Humming Bird award after he escaped from the overturned vehicle climbed up to the highway and alerted people.

She disclosed that the Safety Club teaches the young people how to recognise if someone is in danger, what to do, how to call for help and believes this training helped to save the girl’s life.

While there were a number of adults on the beach and in the water, she says it was the young boy who noticed what was happening and moved into action.

“The whole objective is to expand these young people’s minds in terms of safety,” she said.

“In sports they say start at the grassroots level and you see small children heading to the playing fields and it should be the same with safety so when these young people get into the workplace they are aware of safety and can look after not only their safety but that of others,” she remarked.