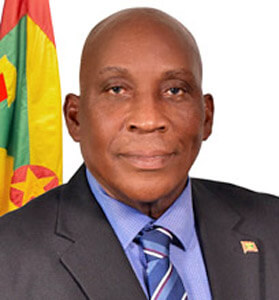 The long-awaited repair of the Moliniere Main Road in St. George following extensive slippage that has caused major inconveniences for residents, businesses in the area, and motorists for almost three (3) years, is scheduled to start Monday, according to the newly installed Minister for Infrastructure, and Physical Development, Public Utilities, Civil Aviation & Transportation, Dennis Cornwall.

The senior government minister made the disclosure during last week Thursday’s sitting of the House of Representatives at Mt. Wheldale in St. George as the deliberations in the Eleventh Session of Parliament got on the way with an official opposition side for the first time in nearly a decade.

The newly elected Member of Parliament for St. Patrick East was at the time responding to concerns advanced by Member of Parliament for the western constituency of St. Mark Dr. Clarice Modeste-Curwen, over the delayed start of the Moliniere Land Slippage project, which suggests that it is a deliberate act on the part of the new Congress government of Prime Minister Dickon Mitchell.

Large-scale degradation of the Moliniere Main Road has led to its closure since December 16, 2019, resulting in traffic being re-routed through the hilly village of Mt. Moritz, and some residents were forced to vacate the immediate area as the cracks in the road widened and deepened putting the structures of their homes and businesses at risk.

Dr. Modeste-Curwen, who was appointed the Deputy Speaker of the Lower House during last week’s sitting, had cited the concerns of villagers and motorists that the one-way traffic road through Mt. Moritz poses significant difficulties as it was not built to facilitate frequent and heavy traffic.

The former Tourism & Civil Aviation Minister told Parliament that before the change of government in June, assurance was given by the outgoing Infrastructure Minister Norland Cox that “work was supposed to start with a sense of urgency given the situation and the inconvenience,” and was earmarked to last for approximately 10 months.

The longstanding female MP noted that the project was widely advertised, and “a company from St. Lucia won the bid (and) had mobilised into Grenada a few months ago,” however, she said that work is yet to commence on the project.

She also expressed concern that “there is a running cost being accumulated (by the government) without the necessary work being done or achieved.”

“And, therefore I will beg the government in office to look into the matter to resolve the situation, and save the hemorrhaging that we would be experiencing for payment for work that is not done, and also to ease the road navigation on the western coast,” the St. Mark’s MP added.

Tasked with the responsibility to ensure that all the programmes and projects of the new government happen in a timely and efficient manner is Minister for Mobilisation, Implementation, and Transformation, Andy Williams, who acknowledged the concerns raised by the MP for St. Mark but described her statements as “misleading.”

The first time MP for the South St. George constituency informed Parliament that although a contract was signed, the concessions for the St. Lucian company were not ready, neither were negotiations completed with the landowners, and that considerations were not given to occupants of the houses located above the Moliniere road which will be affected by the start of work in the area.

“…As a responsible government we found it necessary to do due diligence before we start with this project…and we decided to get the people involved, and to enter into negotiations with them before we touch anything there on the property in Moliniere,” he remarked.

Infrastructure Minister Cornwall also told the House that “notwithstanding there were issues of compensation for the lands owned by the people who live in that particular location among other matters that had to be resolved…to state that this administration unnecessarily delayed the start of that project is incorrect.”

“…We need to set that record straight,” Minister Cornwall said, adding that the importance of completing the ongoing Mt. Kumar Road project in Beaulieu, St. George, to facilitate the transportation of materials onto the Moliniere work site.

Work commenced late last year on the construction of 3,000 feet of asphalt road in Beaulieu, with appropriate drainage and a new bridge, and was expected to last for seven (7) months.

Prime Minister Mitchell, also echoed the need to complete the Mt. Kumar road, which will also serve as an alternative bypass route for motorists traveling from the western side of the island to the capital and vice versa.

He stated that the project, which was budgeted at “$3 million” required “an additional $8 million,” which was “reallocated in the capital budget to take it to $11 million.”

“…The reality is an additional sum is required to get this (the Mt. Kumar) road completed…so, in effect, even if the contract was signed, the lands surrounding the Moliniere area were acquired, the concessions were granted and the equipment is on the island, if you do not have that bypass road completed we will not be able to do the Moliniere road unless we carry the materials all around the east coast, and all the way down the west coast, PM Mitchell explained.

“That is the reality that we met, and it is the reality we are dealing with, with a view to getting this bypass road completed so that work on the Moliniere road can start,” he said.

Approximately one (1) month after a portion of the Moliniere Main Road collapsed, the area was identified and declared a sub-national disaster zone in January 2020, as a measure to help speed up the process to receive grant funds to assist the emergency relocation of affected residents.

The Moliniere Main Road forms part of the Western Corridor Upgrade Project, which stretches from St. George’s to St. Mark.

The Western Corridor project is expected to make major upgrades to the approximately 20km of a key arterial route along the west coast of the island between St. George’s and St. Mark’s, improve transportation infrastructure for key agricultural and tourism areas to drive economic growth, and is said to be specifically designed to incorporate improved climate resilience, and a much-needed road safety component.

A Florida-based engineering firm, Caribbean Civil Group Ltd., had completed a geotechnical investigation and detailed designs for the Moliniere slippage, and the Western Main Road Corridor, in January last year, to the tune of $5.1 million, to remedy the collapsed section of the Moliniere road for work to be undertaken.