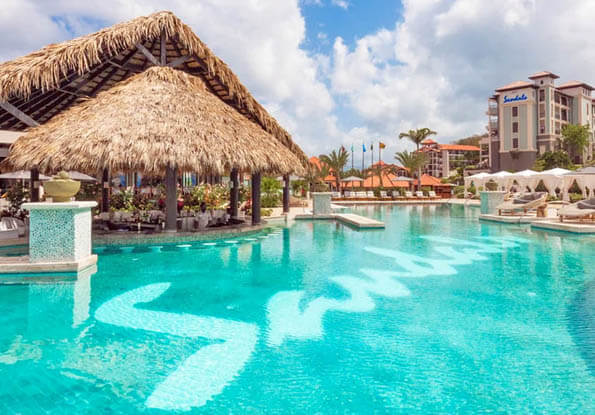 This is the question which many local tourism officials are asking following a weekend presentation by the Jamaican-owned Sandals La Source on its planned re-opening of the luxury resort in the south of the island on October 1.

An official who took part in the ceremony said it was very impressive and he concluded in the end that Sandals La Source was calling the shots and putting the Keith Mitchell-led government in an uncomfortable position to re-open the Maurice Bishop International Airport (MBIA) to Covod-19 hot spots like Miami in the United States.

He described as “a great sales job” the effort made by Sandals to force the ruling New National Party (NNP) administration into a corner with respect to allowing the flights with tourists from virus-stricken parts of the world to land at the airport.

“It was amazing. It was a fascinating two hours that we spent there – Sandals are brilliant with their PR (Public Relations) and their marketing. There is absolutely no question about it, they had 10 speakers, all of them Sandals employees …and they were all on point, they never missed a beat” he said.

“…We know that is all crap because they are not coming in twice, five times a week but it doesn’t matter – what they have done is they have said to the government, now stop us. The government is absolutely hopeless, the government is helpless – they cannot now say to Sandals no you can’t open up.

“Those guys are amazing. “I think what they (Sandals) did there was brilliant. Sandals has literally forced their hands and quite frankly it needed somebody like Sandals to do that – the likes of us, there is no way we have that sort of clout.

It is estimated that Sandals might have been losing EC$ 1 million a month in Grenada by keeping its business closed.

According to the official, the Sandals team spoke positively about everything concerning Grenada, its brand and the need to get its 600 plus employees back on the job.

Related:  Burial sites in St. George are running out of space

He said that the Sandals officials never for one moment talked about closing any of their resorts in the Caribbean due to Covid-19 and concentrated their efforts on getting participants to focus on how successful the re-opening of their resorts were in islands like St Lucia, Barbados, Jamaica and Antigua.

He pointed out that the internationally recognised hotel brand with headquarters in Jamaica spoke about how flights were coming into these islands with full loads especially from North America.

According to the top tourism official, there is no way that all 600 employees at the resort will get work in the early months of re-opening since he has reasons to believe that these workers will be working on rotation and not on full time employment in the initial phase of the re-opening of the hotel.

The official is also forecasting that the major airlines will be coming in with a half load at most but there are still many question marks on the precise protocols to be put in place for arriving visitors especially from the United States which is a hotbed for the virus.

“As a country we need to get the thing (tourism) up and running to get the economy going again. We have got to take the risk,” he said.

“I understand where the government is coming from- it’s political suicide for them to make it – as soon as they bring in flights (from the United States) everybody is questioning that they are going to get the virus.

“Sandals have forced their hands and the government has apparently catapulted and can’t stop it now. I would imagine that they (government) will welcome it. It’s a good move – Sandals has done a brilliant job.

The top industry player noted that Sandals has put in protocols of its own that far exceeds those from the Ministry of Health.

Sandals has produced a glossy booklet with all its protocols covering from front desk, taxis, airport pick-up and house-keeping.