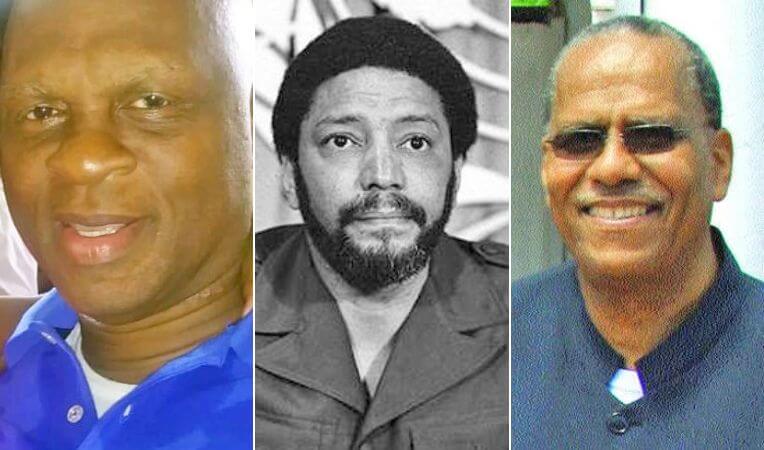 (L-R) Callistus Bernard – identified as the leader of the Execution Squad; Maurice Bishop – gunned down on the fort in a power struggle within the NJM; Bernard Coard - the mastermind behind Joint Leadership with Bishop

Thirty-nine years after a bitter feud in Grenada which led to the execution of Marxist Prime Minister Maurice Bishop, the two warring factions within the Grenada Revolution have not been able to heal their differences.

THE NEW TODAY has been made aware of plans for a reconciliation event to be held in November but it has apparently been shelved.

According to one insider, invitations were sent out to those former government and army officials who were convicted for the murder of Bishop and three Cabinet Ministers – Unison Whiteman, Jacqueline Creft and Norris Bain – on October 19, 1983 in the bitter internal power struggle for control of the New Jewel Movement-led People’s Revolutionary Government (PRG).

The Prime Minister and his colleagues were lined up on the “Top Square” of Fort George, known as Fort Rupert during the revolutionary period and gunned down by a 5-man Firing Squad under the command of Lieutenant Callistus “Iman Abdullah” Bernard.

Bishop had reneged on an agreement for “Joint Leadership” of the ruling party with Coard who held the position of Deputy Prime Minister and Minister of Finance in the government.

Among those who received lengthy prison sentences for the killings were Coard, who is said to be the architect of the Joint Leadership proposal, and mastermind of the coup to unseat Bishop, as well as top army officers, Lieutenant-Colonels Ewart “Headache” Layne and Liam (Owusu” James and Majors Leon “Bogo” Cornwall, John “Chaulkie” Ventour, and Ex-Mobilisation Minister Selwyn Strachan.

The insider said it is extremely difficult to bring the “two sides” together in light of the fact that those followers of Coard known as “Coardites have refused to accept “criminal responsibility” for the mass killings on the fort.

He recalled the failed efforts made for over a decade by top Roman Catholic priest, Fr. Sean Doggert to bring the two sides together.

He said that although Callistus Bernard is not an official member of the grouping of ex-soldiers he did attend about three sessions.

The insider pointed out that “Abdullah” is not in total support of the November event planned to bring together the Bishopites and Coardites.

He said that Callistus Bernard expressed the view that “we cannot change what happened back in October 1983” and stated that those who were involved should use it positively in terms of never again making hasty decisions.

The insider also said the leader of the Maurice Bishop Execution Squad made some disparaging remarks against two former top army officers – General Austin and Major Ian St Bernard for coming out and making public pronouncements on the October 1983 bloody events.

He accused Austin and St Bernard of choosing to go the route of “scandal” by “burning their own comrades in order to appease the other side or find some false redemption.”

This is a clear reference to an interview that General Austin had done with THE NEW TODAY in which he blamed Coard and members of his clandestine group known as OREL for the attempted coup which led to the killing of Bishop.

Austin charged that he was not part of any plot to kill Bishop but when the Coard Group failed in their efforts to seize power from the Prime Minister they then turned the guns on the people and killed several Grenadians.

In the case of St Bernard, he issued a statement just over a year ago and pointed a finger at a group of ultra-leftists who rose up within the bowels of the NJM to stage a coup against Bishop.

Both Austin and St Bernard were members of the Central Committee, the major decision making body within the ruling NJM party.

Like Austin, St Bernard denied that there was any meeting of the NJM Central Committee on the fatal day, which took the decision to execute Bishop after he was recaptured on the fort after demonstrators stormed his home at Mt Wheldale and freed him from house arrest.

Austin charged that the decision to execute came not from the high organ of the NJM but the leaders of OREL.

The ex-soldiers who have been meeting in recent months are not concerned with politics but the welfare of ex-members of the disbanded People’s Revolutionary Army (PRA) to help many of them who are in the twilight of their years and facing severe health and financial difficulties.

According to one insider, the group has been meeting sometimes twice a month with one of the key organisers being Manley Phillip who served as a Demolition expert in the army.

He said the organisers are trying to mobilise support both inside and outside of the island to help out these ex-soldiers.

One of the things done by the group took place two weeks before the death of Commander of the Armed Forces, General Hudson on September 24.

The ex-soldiers were made aware of the “conditions” under which the former army boss was living at his home in Mardi Gras in St Paul’s.

According to one member of the group, a decision was taken to assist in cutting the grass around the premises.

He quoted one member as saying that he had visited the area and a neighbour pleaded with him to assist General Austin as the place was covered with bushes and on looking he thought that no one was living in the house.

Over the years, events to mark the bloody events on the fort that led to the demise of the Grenada Revolution were spearheaded by the Maurice Bishop Martyrs Foundation, led by medical doctor Terrence Marryshow but it has petered down in recent times.