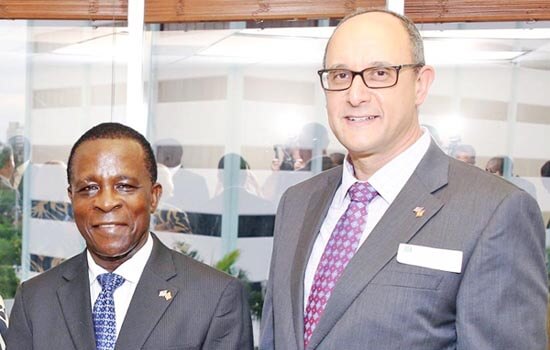 Prime Minister Dr. Keith Mitchell and Warren Newfield who quit as an Ambassador after accusing the regime in St. George of being anti-business

Ambassador Newfield “has more on Keith than Keith has on him”

With general elections two years away in Grenada, a number of key allies in New York of Prime Minister Dr. Keith Mitchell and his ruling New National Party (NNP) are turning their backs on him.

THE NEW TODAY was told that some of them are also reaching out to Ambassador Warren Newfield who resigned his diplomatic position last week with a stinging attack by accusing the Mitchell-led government of pursuing an anti-business” posture.

Newfield, the former Ambassador-at-large and Consul General in Florida, is the businessman behind the Kimpton Kawana Bay resort in the south of the island near to the Grand Anse beach.

A former top NNP supporter in “The Big Apple” disclosed that the former supporters of PM Mitchell are in touch with the hotel developer who quit just over a week ago and faced a barrage of attacks from the Grenadian leader including a charge of being a racist.

He warned the Prime Minister of trying to “bite the hand that feed him” but did not elaborate.

“This guy (Newfield) has more on Keith than Keith has on him,” he said.

The ex-Ambassador has assured associates that he will hit back at Prime Minister Mitchell at the appropriate time for the attack on him.

According to the former NNP official, he is not surprised at the turn of events between PM Mitchell and Ambassador Newfield given the past history of the Grenadian leader.

“I am a man that helped push this man (Keith Mitchell) here (in New York). I did all his fund-raising and other stuff for him. It’s all of us who used to help him. This guy didn’t treat us well at all. The whole table turned sour up here (New York) for him,” he said.

Describing himself as once “the key man” in the NNP Support Group in New York for years, the official accused Dr. Mitchell of turning his back on them after the 2013 general election and forging a strange and close relationship with former Congress General Secretary and ex-government minister Peter David and his allies.

He said that when Dr. Mitchell was in opposition during the 2008-13 period, he came to New York often and informed supporters repeatedly that David wanted to jail him.

He recalled the current Prime Minister mentioning to them that David, who held the portfolio of Foreign Affairs in the NDC administration, was involved in taking away his wife’s diplomatic passport to embarrass him.

“For years he (PM Mitchell) was preaching the same story (about Peter David) and as soon as he win (in 2013) it’s Peter David, Hamlet Mark, Arley Gill and all these people who got key roles in the new government,” he remarked.

The official recalled the time and place where Dr. Mitchell and Mark patched up their differences in time for the 2013 poll in the so-called “Project Grenada” initiative.

“Hamlet Mark met Doc in the same house where I am right now. That is where they mend their differences here in Fort Lauderdale – North West 73rd Street. As soon as the man win he turn tail on everybody here and he picked up his enemies,” he said.

Describing himself as “the key money man” for NNP in New York, he said that the Prime Minister “first turned his back on us” in order to embrace “his enemies”.

Under the banner of “Rocking J Entertainment”, the political activist said that some of the top calypsonians like Talpree, Brother B, and Skinny Banton were brought to perform in the United States to help raise funds for PM Mitchell and NNP.

The ex-NNP “foot solider” in New York told THE NEW TODAY of his role in helping to battle with information in the public domain that Dr. Mitchell was facing possible jail time from a case brought by U.S citizen Charles Howland that was related to the US$500, 000.00 Switzerland briefcase scandal involving the Grenadian leader.

He spoke of visiting the court in Manhattan to look at the status of the case file and realised that PM Mitchell was not facing imprisonment since he had successfully applied to Washington for immunity from prosecution in the matter.

“When they say that he was going to jail I go and I pulled the case and I say this case is on hold (and) that is not what’s happening there and that is how he came and win the election. That man is not a nice man”.

The former NNP supporter also chided PM Mitchell for the lack of respect shown to the late OECS Court of Appeal Judge, Albert Redhead of Grenada who reportedly rendered a number of free legal advice to his government but was not recognised on his passing just over a year ago by the regime in St. George’s.

“Every day am hearing negatives (about Prime Minister Mitchell) and his treatment of people,” he said.

The ex-Mitchell supporter indicated that some of the NNP Support Group members in New York are now associating with former Ambassador Dr. Patrick Antoine who has indicated that his non-Governmental Organisation (NGO) known as The Grenada Movement (TGM) will soon be turned into a full-fledged political party.

THE NEW TODAY was able to verify that one of the named persons is already on the island operating in the St. Andrew area and held “a cook-up” for Dr. Antoine during a recent visit to the island from his base in neighbouring Trinidad & Tobago.