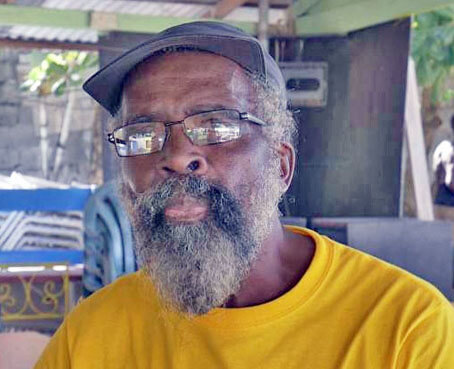 Justice Agnes Actie has ruled in favour of small businessman, Dorset Charles who brought a case against attorney-at-law, Reynold Benjamin for money collected in a case brought against the Keith Mitchell-led government.

Both the high court and the Court of Appeal ruled in favour of Charles after Mitchell’s ruling New National Party (NNP) government illegally demolished his Worldwide Watersports business on the Grand Anse beach shortly after it won the 1995 general election.

The small business operator retained Benjamin to represent him in the court matter which ended in a souring of the relations between the attorney and his client.

Charles claimed that Benjamin had collected a particle payment of EC$100, 000.00 from government and took all the money for himself.

This prompted the Grand Anse resident to take his lawyer to court.

As a public service, THE NEW TODAY reproduces in full the judgement handed down by Justice Actie on the matter: 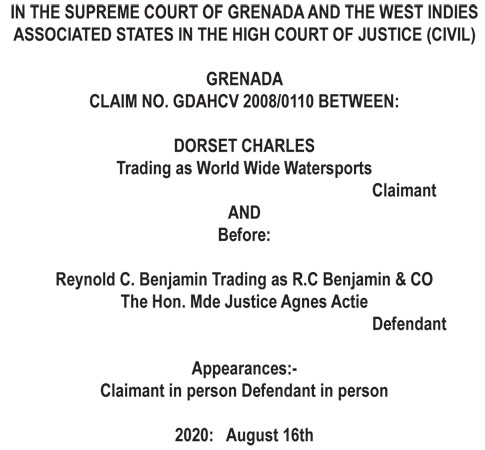 JUDGMENT
ACTIE J: This claim is of some vintage and the parties are both litigants in person. It is the evidence that on 25th April 1996, the claimant, Dorset Charles engaged the defendant,’ Reynold Benjamin of the law firm R.C Benjamin & Co to represent him in a court claim number 477/1996 against the Government of Grenada to recover damages for the demolition of his premises and equipment.

It is Mr. Charles’s evidence that to date he has not realised the fruits of his judgment from the Court of Appeal. However, it is the evidence and accepted by Mr. Benjamin that the Government paid the firm of R.C Benjamin & Co the sum of $100,000.00 under the judgment debt.

Mr. Benjamin conceded receiving the sum of $100,000.00 from the government and counterclaims for the remaining sum of $220,000.00 plus interest under the contingency fee arrangement.

Mr. Benjamin at trial states that he had discussions with Mr. Charles about his inability to satisfy fees in the High Court claim in 1996. Mr. Benjamin outlines the various stages in the litigation including an application for an injunction followed by representation at the Court of Appeal for which he said would have increased the $10,000.00 previously agreed.

Both in his evidence and at the trial, Mr. Benjamin intimated that the contingency fee agreement was initially made orally and was subsequently endorsed in writing and signed by Mr. Charles on the back of the Court of Appeal consent order. Mr. Benjamin states that the said order was lost during hurricane Ivan.

Mr. Charles admits that he is indebted to Mr. Benjamin in the sum of $9000.00. Initially he said that he did not have discussions or made any arrangement for the additional fees. In cross-examination, Mr. Charles states that he remembered the mention of 20% but he vacillated when asked about the signing/ endorsement on the Court of Appeal order.

Having heard the evidence, I accept Mr. Benjamin’s evidence that the receipt dated 25th April 1996 for legal fees of $10,000.00 was in relation to the High Court claim. The parties could not have contemplated an appeal in 1996 when the claim was filed and in any event the retainer would have expired at the completion of the trial at the High Court level. Any representation on appeal would have been on a new retainer arrangement.

The only issue for determination is whether there was a contingency fee arrangement and if so whether the said arrangement is enforceable. As was indicated earlier, there is no evidence of such signed agreement.

Having reviewed the evidence and heard the parties, I do not accept Mr. Benjamin’s evidence that such an arrangement was endorsed on the Court of Appeal. It is incongruous that an Attorney-at-Law would have made such an informal arrangement in light of the fact the same client had failed to complete payment on the High Court fees. Any such arrangement in my view should have been expressed in writing in advance of the appeal. This would have given the client an opportunity to solicit independent advice or engage other counsel if necessary. This is the expected standard practice in keeping with the professional practice and etiquette of an Attorney- at- Law.

Secondly, even if there was a contingency fee arrangement, there is a long established common law rule of professional conduct against contingency fees that forbids a Solicitor from accepting payment for professional services on behalf of a claimant calculated as a proportion of the sum recovered from a defendant.

A contingency fee, that is, an arrangement under which the legal advisers of a litigant shall be remunerated only in the event of the litigant succeeding in recovering money or other property in the action, has always been regarded as illegal under English law on the ground that it involves maintenance of the action by the legal adviser.

Moreover, where, as is usual in such a case, the remuneration which the adviser is to receive is to be, or to be measured by, a proportion of the fund or of the value of the property recovered, the arrangement may fall within that particular class of maintenance called champerty.

In Wallersteiner v Moir (No 2)2 Lord Denning, then Master of the Rolls said,

‘It may be worthwhile to indicate briefly the nature of the public policy question. It can, I think, be summarised in two statements; first in litigation a professional lawyer’s role is to advise his client with a clear eye and an unbiased judgment; secondly, a Solicitor retained to conduct litigation is not merely the agent and adviser to his client, but also an officer of the court, with a duty to the court to ensure that his client’s case which he must of course present and conduct with the utmost of care of his client’s interests, is also presented and conducted with scrupulous fairness and integrity. A barrister has similar obligations.

A legal adviser who acquires a personal financial interest in the outcome of the litigation may obviously find himself in a situation in which that interest conflicts with those obligations.’

“when the maintainer seeks to make a profit out of another man’s action by taking the proceeds of it, or a part of them, for himself. Modern public policy condemns champerty in a lawyer whenever he seeks to recover not only his proper costs but also a portion of the damages for himself, or when he conducts a case on the basis that he is to be paid if he wins but not if he loses.”

The English Court of Appeal in a more recent decision in Morris v Southwark London Borough Council4   held that:

“where the allegedly champertous agreement was entered into with a person who   was conducting   the litigation or providing   advocacy   services, the common law of champerty remained substantially unchanged as it was a clear requirement of public policy that officers of the court should be inhibited from putting themselves in a position where their own interests could conflict with their duties to the court;

Applying the authorities to the facts, firstly I do not accept Mr. Benjamin’s evidence that the agreement for payment of fees was endorsed on the Court of Appeal order and even if it was, is unenforceable.

Mr. Benjamin as an Attorney-at-Law should have been well aware of the unenforceability of a contingency fee agreement. The law against contingency fees and champerty has its origins as a principle of public policy designed to protect the purity of justice and the interests of vulnerable litigants.

I agree with Mr. Benjamin however that he is entitled to costs for representing Mr. Charles at the Court of Appeal. Mr. Benjamin’s recourse at the time was to have applied to the court to have his costs taxed, which was the procedure prior to CPR 2000 when a client challenged costs. Until then Mr. Benjamin had no call on the monies due to Mr. Charles under the judgment.

In the circumstances, Mr. Benjamin is to reimburse Mr. Charles the money received from the Government on his behalf. It is unfortunate that this matter is only now being determined in an excess of a decade since the filing of the claim in 2008. The new dispensation under the CPR 2000   requiresan application for an assessment of reasonable costs taking into consideration the provisions of CPR 65.3.

ORDER
In summary and for the foregoing reasons, it is ordered as follows

Mr. Dorset Charles states that he has not received any compensation from the Government of Grenada under the consent order for the sum of $1,661,340.00 with costs of $15,000.00 made by the Court of Appeal in 1998. The issue was not before the court for determination. It is for Mr. Charles to make his enquires at the appropriate government department.