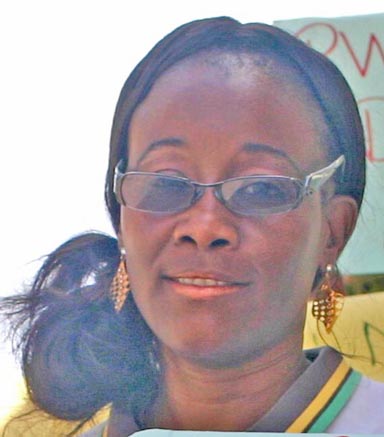 President of the Public Workers Union (PWU) Rachel Roberts has accused the Chairman of the TAMCC College Council, Augustine Vesprey of “using alternative facts” as a weapon of disrepute against her following a verbal altercation between the two of them on the compound of the institution last week Tuesday.

One day after the incident, TAMCC sent out a news release detailing its account of what transpired between its council chair and the PWU leader in which he questioned the authority of PWU to bargain on behalf of TAMCC workers and refused to supply a document entailing the details of the payment arrangements for the outstanding increments still owing to workers, among other things.

Speaking on the issue in an interview with THE NEW TODAY on Tuesday, Roberts explained that the document was signed between PWU and TAMCC last December paving the way for the first part of the outstanding increments, which was paid before Christmas Day but the document was not handed over on the premise that a few corrections had to be made.

According to Roberts, Vesprey refused to give her the document on grounds that the Union does not have the proper certification to represent the workers, a move she believes is an attempt to “destabilise the PWU from representation at the TAMCC.”

She told this newspaper that from the inception of the request for increments last November, the Vesprey-led College Council has always brought up a number of other issues as stumbling blocks.

“From since that time a number of issues have been brought up about the PWU’s representation at the TAMCC (but) we recognise and TAMCC has to recognise that past presidents of the PWU served on the Board of TAMCC way before my time…and the Public Workers Union must have a seat on the board because it represents workers of TAMCC,” she said.

“PWU represented TAMCC before it was TAMCC, when it was the Grenada Technical and Vocational Institute, when it became the National College and now the T.A. Marryshow Community College…PWU represents five statutory bodies TAMCC, National Water and Sewerage Authority (NAWASA), Grenada Bureau of Standards (GDBS), Grenada Industrial Development Corporation (GIDC) and the Housing Authority of Grenada and we have never to this day, ever had such questions about our certification in anyone of these institutions…This is a non-issue,” she added.

“So, we are not going to allow this statement made by Mr Vesprey to create any pressure on the PWU to destabalise its members that they become fearful that they do not have representation because that is what TAMCC is trying to do,” she remarked.

Roberts also used the opportunity to respond to a part of the TAMCC statement which said that since November 2019, “Ms. Roberts has been making regular visits to the campus to agitate, adopt trade unionist tactics and in some cases, to dictate administrative roles and functions, such as instructing the Principal on how to deploy staff, to the discomfort of the college administration. Such behavior contravenes the conduct and duties of a Member of the College Council and labour relations.”

The PWU boss said: “I am very much appalled and shocked that he (Vesprey) would put out such fabrication…and specifically, I want to say to Mr Vesprey, I am not aware that the TAMCC Board has made such a statement or has made such an accusation of the PWU and if it happened I would like the members of the Board to so state because I am not aware of it and I dare say that I don’t know that members of the TAMCC Board are aware that such a statement was released on behalf of the TAMCC because to my mind it appears that this statement is Mr. Vesprey’s statement (because) it seems to be mixed with the truth and fabricated truth.

“It seems to me that Mr. Vesprey has used a lot of alternative facts to try to place the President of the Public Workers Union in a negative light, that is what I am seeing happening….Mr. Vesprey needs to say to the Grenadian public that during the period of industrial action Sister Rachel Roberts was leading her members in industrial action and yes, Sister Rachel Roberts would have been on campus doing just that…and yes the whole public saw me and I am proud to say that I led the members to ensure that they would get their increments because without that action we would not have gotten our increments and it seems to me that all of this is about preventing workers from being able to get their remaining increments,” she added.

Roberts went on: “It appears to me that Vesprey is not very interested in maintaining harmonious industrial relations at TAMCC and appears more interested in winner takes all and does not see the benefits of win, win, so that stakeholder gain. As such, it does not appear that he possesses the right aptitude and interpersonal skills and may not be the best person to be at the helm of the College Board.”

Having witnessed some of what transpired between Vesprey and their leader last week Tuesday, the workers held a lunch time meeting in which they decided to wear union t-shirts on the following day to signal their displeasure with the treatment meted out to their leader.

Roberts told THE NEW TODAY that the document, which is being withheld by Vesprey outlines the resolution to several issues surrounding administration, human resource, and other confidential issues affecting the college operations and the framework for the payment of the remaining outstanding increments, which are expected in April and August.

See pages 8 and 14 for the contents of the document that detailed the TAMCC/PWU/GUT agreement.