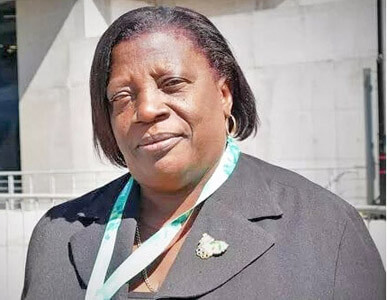 Veda Bruno Victor has left the island for another major outing

The controversial pairing of Royston La Hee and Veda Bruno-Victor is again back in the news with the Grenada Olympic Committee (GOC).

An official of GOC confirmed to THE NEW TODAY that both La Hee, the former longstanding President of the local body along with Bruno-Victor, the General Secretary are both attending the Commonwealth Games from July 28 to August 8 in Birmingham in the United Kingdom.

He said that the local body has nothing to do with the selection of La Hee who had come in for heavy criticisms over the running of the GOC that forced the 83-year old not to seek re-election to the post.

According to the official, La Hee is going to Birmingham as the guest of Bruno-Victor in-keeping with the rules and regulations of the organisers of the Commonwealth Games and there is nothing that GOC can do to interfere with this arrangement.

The GOC official was at pains to point out that the guest selected by Bruno-Victor is not going to the games at any cost to the local body.

The official disclosed that the Acting GOC President Chenny Joseph has also left the island for England to attend the Commonwealth Games but unlike Bruno-Victor , he is not taking along anyone with him as his guest.

The duo of Veda Bruno Victor/Royston La Hee featured heavily over their stewardship of GOC and the failure of the body to account for over EC$440, 000.00 given to the organisation by Olympic Solidarity(OS), an arm of the International Olympic Committee (IOC) for the development of sports in Grenada.

An internal investigation conducted by the Deputy Chairman of the Finance Committee concluded that thousands of dollars cannot be accounted for due to a lack of receipts.

OS has written to GOC to account for the money or pay it back.

Grenada is sending a 20-member team of athletes and coaches to the Commonwealth Games.

Among the athletes are world Javelin champion Anderson Peters who just won Gold in the event at the just-ended World Athletics championship in Oregon in the United States, as well as fellow Olympians Josh Boateng, Kurt Felix, and Lindon Victor.

Three notable coaches are also going to Birmingham – Paul Phillip who is linked to Anderson Peters as well as Wayne McSween and Stephen Benjamin.