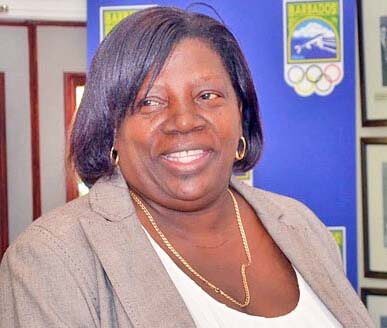 The two contenders for the post of General Secretary of the Grenada Olympic Committee (GOC) had a bitter verbal clash of words on Saturday at a meeting of the organisation held prior to elections due on September 11 to elect a new executive for the problem-plagued national sporting body.

Well-placed sources told THE NEW TODAY that the incumbent, the controversial Veda Bruno-Victor was adamant that she will contest the post in the face of suggestions from the challenger Sports journalist Ray Roberts that she should stand down due to the damning report against her by the Finance Committee of GOC.

The Ralph Lord-led group of investigators found several irregularities involving the General Secretary over the sporting body’s failure to account for an estimated EC$440, 000.00 grant given by Olympic Solidarity (OS), an arm of the International Olympic Committee (IOC) for the development of sports on the island.

Bruno-Victor was identified as the person who spearheaded the withdrawal of thousands of dollars from the bank where the funds were lodged without leaving a paper trail.

She was also cited for providing opportunities for her husband, a former policeman, to benefit financially from the OS money.

According to a source who attended the meeting, the Roberts vs Bruno-Victor war of words took many by surprise as the outgoing General Secretary held firm that she would not bow out peacefully, “she said no – throw me out”.

“I can’t believe I could sit down and hear (Veda Bruno-Victor) say she sees nothing wrong in family members benefitting from whatever it is,” he said.

He also said that the behaviour of the old executive towards the OS issue cannot be defended by any respectable organisation.

According to the report from the Finance Committee, the evidence unearthed is that the embattled General Secretary was the person who did up the voucher and signed off for the payments to her husband.

“…She categorically saw no problem with that,” said the source.

He also said that Bruno-Victor dismissed the IOC money issue as no big thing at all.

The source quoted Roberts as saying that while IOC will not make any public statements on the issue, it will no longer take Grenada seriously for its failure to account for funds.

He noted that the money was given way back in 2013 and up to 2021 no proper accounting has taken place for the funds by GOC which prompted OS to ask for it to be repaid.

He said that Roberts blasted Bruno-Victor for still wanting to run for office despite the damaging FC report on her.

He stated that Roberts indicated to Bruno-Victor that she should pull out of the race and admit to the local media that she made “errors” and would work with the incoming GOC Executive and not contest positions.

The General Secretary retorted: “Ray Roberts, you mad – ah running, ah want all you throw me out – well all you go put it in the papers”.

Roberts replied, “My dear it has nothing to do with throwing out”

THE NEW TODAY understands that some key allies of the General Secretary have been calling Roberts to give him support in the battle to unseat the incumbent.

“I don’t know but a lot of people just want to see her (Veda) out. I have never heard people defend (so much nonsense),” said a GOC member.

“You cannot have a business that is not yours and you bringing your husband to drive the bus in the games here and you see nothing wrong because you are doing all the work (for GOC) and he has to come and pick you up all in the night,” he added.

Roberts has told associates that he plans to send out a circular as part of his campaign strategy to solicit votes of clubs in the battle against Bruno-Victor who has been a dominant force on GOC for over 20 years.

Another GOC insider described Bruno-Victor as having “a hard head” since several persons have been calling her on the phone and trying to persuade her not to seek re-election.

Roberts suggested to the meeting that a way out is for GOC to put out a release thanking Bruno-Victor for her years of service and that she would co-operate with the transition that was taking place within the organisation.

However, the General Secretary is said to be getting strong support from former National athlete Conrad Francis of the Grenada Amateur Athletic Association and Jason Stanislaus of the Table Tennis Association.

According to one GOC affiliated member, he was stunned by comments made in the meeting by Stanislaus that he saw nothing wrong with the manner in which the OS funds were spent and not accounted for.

The source also pointed at a debate during the GOC meeting in which it was suggested that if members are going away on IOC business and the world body is giving them a stipend then they should not take any additional stipend from GOC.

“You know Jason (Stanislaus) says he doesn’t see anything wrong in it (taking the GOC money),” he said.

THE NEW TODAY was told that a key vote in the GOC internal election will be athletics’ Aaron Moses.

According to sources, Francis and some of the pro-Bruno-Victor allies are trying to force him to cast the crucial vote in her corner.

Moses is said to be reluctant to do so in light of the OS issue and other things that do not cast a positive light on the old executive.

He said the plan was to put somebody to sit close to Moses on Election Day to ensure that he did cast his vote for Bruno-Victor.

However, it had to be shelved since the voting will be done Virtually with persons doing so from their own homes due to the Covid-19 situation in the country.

About 34 persons are expected to cast votes in the GOC election, in which the winner has to secure at least 50% plus one of the votes cast.

Speculation is rife that the anti-Bruno Victor faction within GOC can count on at least 13 votes but is not sure about the votes from the Grenada Boxing Association, and the Karate Association.

However, a member of the faction said it was confident of emerging victorious out of the belief that, “We have the votes…” to win the contest.

Another controversial GOC executive member who is seeking re-election was subjected to an investigation a year ago over alleged demands for a kickback in a Landscaping contract.

An insider within the sporting body described as “ridiculous” some of the questionable persons on the GOC executive who are seeking re-election given their past track record.