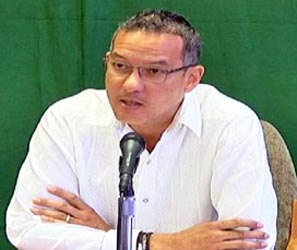 The cut-off point for receiving the first dose of AstraZeneca appears to have changed.

During a media briefing Tuesday, Minister of Health Nicholas Steele said that another ten thousand doses can still be administered although the May 17 deadline, announced by him last week has passed.

It is recommended by the World Health Organisation (WHO) that the second dose of the AstraZeneca vaccine be taken within four to twelve weeks after receiving the first injection and ideally, after six weeks.

The new revelations by the Minister means that even those receiving their first dose up to the end of May will still have time to get their second shot with what Grenada has on hand.

People rushed to vaccination points following last week Tuesday’s dire announcement by the Minister that the opportunity would be lost to get fully vaccinated if the first dose was not received on May 17.

As a result vaccination rates shot up to over 1000 per day, compared to an average one hundred per day prior to the warning from the Minister of Health that time was running out.

However by Wednesday, health officials saw a slowing down of people lining up to get the shot because the impression had been given that time was running out.

Health officials do not know from where or when Grenada’s next shipment of vaccines will be available nor whether those receiving their first dose outside of the four to 12 weeks window will be able to get their second shot in time.

In separate comments to THE NEW TODAY, Minister Steele said that while the current stock of vaccines will expire at the end of next month there will be no cut off point for people to get their first dose and that even the first dose will offer protection.

Health officials have said AstraZeneca will protect people from getting severely ill, hospitalisation and death.

“After the first dose the vaccine has about 76% efficacy as opposed to 0% for persons with no dose. We need to protect as many as best as possible with what we have available,” said the government minister.

As of Tuesday, 22, 593 people have received their first dose of AstraZeneca and 6, 500 are fully vaccinated.

Grenada has set a target of sixty percent of the population vaccinated in order to achieve heard immunity and health officials had been hoping to be closer to that figure by now.

But Grenadians were hesitant, prompting Minister Steele to describe the vaccination situation as a “national, collective failure” and sounding the bell of dread that time was running out.

People have been skeptical about the side effects of the vaccine and many persons whom THE NEW TODAY spoke to have said they would prefer to wait until a vaccine is available from Cuba.

Cuban scientists have been working on several vaccines that are now in various stages of trial.

Minister Steele said Grenada would source vaccines once they are approved by the World Health Organisation.