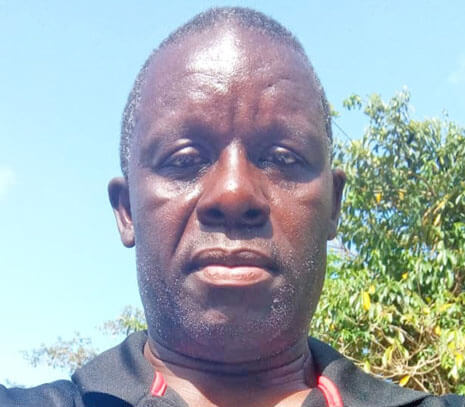 Jude Regis – The Grenadian-born U.S citizen who is annoyed with the manner in which he was searched on the high seas by Coastguard personnel from Barbados and the United States

The U.S Embassy in Barbados has admitted that there was an incident on the high seas three weeks ago between its Coastguard personnel and a small fishing boat from Grenada.

A statement was sent Thursday by the embassy to THE NEW TODAY which had broken the story about the incident in which Café, St. Andrew fisherman, Jude Regis reported that he was left shaking after a chase in which his boat was caught about five miles outside Grenville.

According to Regis, he had initially thought that it was a trawler that he had spotted in the water following him and had no idea that it was U.S and Barbados personnel who were involved in an operation in Grenadian waters.

In the statement, the U.S acknowledged that Regis’s boat was engaged in a lawful exercise and not in any illegal activities.

Following is the full text of the statement issued by the U.S Embassy in Bridgetown, Barbados:

“Grenada is a trusted partner of the United States. As partner nations, we are committed to protecting each other from all threats, be it natural disasters, weapons smugglers, or drug traffickers.

CBSI enhances the sovereignty of partner countries. For example, the Royal Grenada Police Force (RGPF) received a US$1 million upgrade last year for its two Coast Guard interceptor vessels to enhance the RGPF’s ability to conduct maritime patrols and protect its coastal waters.

On March 21, Barbados Coast Guard shipriders embarked on a U.S. Coast Guard cutter conducted a lawful boarding and inspection of a small fishing boat in sovereign Grenada waters. Grenada is part of the Regional Security System (RSS), which permits partner nations within the RSS to pursue vessels that may be involved in illicit activities in its territorial waters.

U.S. Coast Guard officers assisted the Barbados officers in a legal, respectful, and professional manner.   This event was a legitimate fishing trip, but sadly we know others are not and criminals use our waterways as highways to conduct illegal business and crime.

The United States will continue to support Grenada to keep its waters clear of criminals and citizens safe”.

THE NEW TODAY has not been able to solicit a response from the local police force, headed by Edvin Martin on whether it was aware that the U.S and Barbados personnel were conducting an operation in Grenadian waters.

Two weeks ago, head of the Community Relations Department (CRD) of the force, Superintendent of Police, Vannie Curwen was contacted and he promised to get back with an answer and has so far failed to do so.

However, Regis confirmed on Wednesday that an Inspector of Police from the Grenville Station visited his home to solicit a statement on the incident at the request of Commissioner Martin who is believed to have launched an investigation into the matter which has attracted regional and international attention.

According to Regis, he had given the police in Grenville a statement days after the incident but it is believed that the lawmen made “a mess” of it and did not write down a number of pertinent issues.

The Grenadian-born U.S citizen indicated that during the encounter with the Inspector of Police, he formed the impression that the statement given in Grenville “was not enough”.

In addition, he said the police there were at first reluctant to take a statement from him on the incident but one officer insisted that it should be done.

“Apparently what she (the female police officer) write (down) wasn’t enough for them to go by,” he remarked.

THE NEW TODAY understands that the other occupant on the boat with Regis has been contacted by RGPF for his co-operation on their investigation.

A high-level official within the police force has already indicated that he does not expect anything to come out of the Martin-commissioned investigation as the U.S has a right to be in Grenadian waters and often conducts these type of operations in some cases with and without the knowledge of anybody in Grenada.