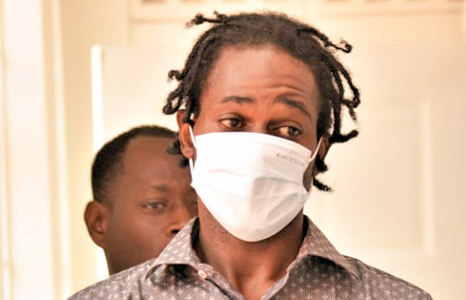 US deportee, 35-year-old Kelly Penny has been slapped with a charge of murder in connection with the death on Sunday of 31-year-old Chris “Benjie” Alfred who was fatally stabbed in the neck close to his home in the village of Boca in St. George North-east.

Penny appeared on Tuesday before Chief Magistrate Teddy St Louis who remanded the murder accused to the Richmond Hill Prison on a Non-Capital Murder Charge until his next court appearance on December 5.

Accompanied by the police, the murder accused maintained his innocence in the matter and told members of the media that he is “not guilty, I am innocent.”

Shortly after the fatal incident, which occurred during the early hours of Sunday morning, a picture went viral on social media showing the deceased father of two (2), lying on his back on the public road with what appeared to be a stab wound to the left side of his neck, and a significant amount of blood about his body.

Some Boca residents have taken issue with the arrival of the ambulance on the scene of the fatal stabbing some 30 minutes after the discovery was made, and expressed the view that more could also have been done by the Police response team to try and save Alfred’s life.

Attorney-at-Law Arley Gill who is representing Penny told reporters outside the court that he did not have much to say about the incident as the Royal Grenada Police Force (RGPF) has not completed its investigations into the killing and that he did not receive disclosure from the Police Prosecution team, led by Assistant Superintendent of Police (ASP) Glen Charles.

“We haven’t even received disclosure as yet so there is absolutely nothing that we can say that will make sense to the press. Those things will be made available to the press in time but (not) at this point…,” Attorney Gill remarked.

The mother of the deceased, Dale Alfred, spoke with reporters outside of the courthouse on Tuesday, stating that the sudden death of her “loving and sweet” son came as a shock as she was not aware of him having any conflict with his accused killer.

“I don’t know what caused that guy to kill my son. We want justice,” said the grieving mother, who told reporters that the murder accused man “was always preaching that he must kill somebody in Boca.”

Earlier in the week, a resident of Boca said that several villagers were uneasy since Penny returned to the village after he was deported from the United States about six months ago.

A female said that some of the church goers were afraid to walk the street in the early morning especially to go to their place of worship because he was often seen walking up and down the village in a menacing way and often issuing threats.

THE NEW TODAY also understands that a sister of the murder accused had taken out a court restraining order against him.

Penny faces a maximum penalty of life imprisonment if convicted of Non-Capital Murder in connection with the death of Alfred, who will be remembered by many for the bamboo brooms he made, and sold from door to door in Boca and surrounding villages.

Alfred’s sudden death came approximately three (3) weeks after a young mother of six (6) Sharon Williams, was struck to death outside her home in Beaton, St. David on October 31, by her former lover to become the country’s 6th homicide.

It is understood that police investigators in the matter have not yet laid a charge against the suspect who allegedly beat the woman repeatedly in the head with a plank, and is said to be still nursing serious chop wounds to one (1) of his arms at the St. George’s General Hospital.