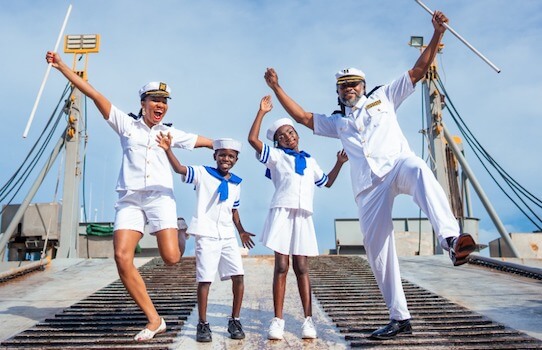 Registration opened last weekend for individuals wishing to masquerade on the streets of St. George, as a member of the traditional ‘Sailor Mas’ band being presented for Spice Mas 2022 by the Upstage TV Show for the national parade on Carnival Monday, and Tuesday.

This year, Upstage TV, which started in 2020 during the pandemic, as a way to showcase local creative talent during the lockdown, “decided to expand to something that you can see not just on TV, or on social media but on the road for Carnival,” said Upstage TV Show’s Producer, and Host, Chrislyn Lashington in an interview with THE NEW TODAY on Tuesday.

The Sailor Mas masquerade, which is said to have been inspired during the 1800s by the presence or return of seafarers of African descent, including Grenadians, who would often parade through city streets when British, French, and American naval ships visited the Caribbean, has over the years significantly declined, and has not been portrayed locally for several years.

While there are many costumes of the traditional Sailor, including the Free French, King, and Fancy Sailor, the Upstage TV Show’s 2022 Mas band will portray the traditional “white sailor” in two (2) categories – “skippers and sailors,” which are open to both adults, and children.

Lashington said the band, which is aiming to accommodate about “250 people” will basically look like a sea of people dressed in white,” and in keeping with the traditional element, will also feature a mobile steel pan band on the road with the mas for the national parade on Carnival Monday, and Tuesday, instead of the popular loud music truck with plans to also have a “mobile live band element with a singer.

“I kept hearing a lot of the senior citizens speaking about the spectacle that is Sailor Mas…It’s a nice clean mas, it’s fun to play (and) it’s family-friendly…So, we are taking it back to the roots, and traditions by having a steel pan band on Monday and Tuesday parading with us, and on Tuesday we are going to add a live band element as well. So, we will have a full live band with a singer on a truck parading the streets,” she explained.

Additionally, Lashington said, the Upstage TV Show masqueraders will also have the opportunity to participate in the Traditional Mas Festival in Victoria, St. Mark on July 23.

Visit upstagemas.com, call or WhatsApp telephone number 405-2255, to register to participate in the Upstage TV Show’s Sailor Mas parade for the return of the highly anticipated premiere cultural festival on August 8 and 9, after two (2) years of no Carnival as a result of the COVID-19 pandemic.

“We are finding a lot of interest among families as well as some mature people who are eager to play Mas again, and give them that feeling of nostalgia knowing sailor mas from way back when, decades ago on the road in Grenada (and) we are seeing Fancy Mas band players leaning to that more modestly clothed mas band that gives you an experience of celebrating steel pan music, and just the traditional mas element in Grenada, which I think is fantastic,” asserted the Upstage TV Show host, who also outlined plans to install pop-ups throughout the country, to afford persons the opportunity to register for the band.

Additionally, Lashington said, people, will have the option to also register at outlets wherever the Upstage TV show Sailor Mas band posters are showcased.