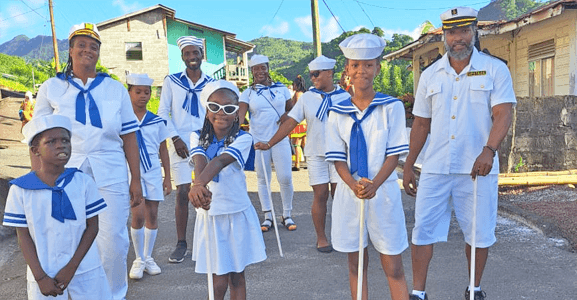 Upstage Sailor Mas Band, which will be part of Spice Mas 2022

This month-end, the organisers of the Upstage Sailor Mas Band will introduce “some enticing specials” in a bid to encourage more persons to sign up to participate in the traditional mas band on Carnival Monday and Tuesday.

“We are going to have some enticing specials for people this month-end to encourage more people to participate,” the Upstage Sailor Mas Band leader, Chrislyn ‘Msy Chrissy’ Lashington, told THE NEW TODAY in an interview on Tuesday.

The specials will include “group discounts,” she said, explaining that for example, “if you’re signing up more than one child, you will have these types of discounts this weekend. So, people can stay tuned to our website and social media pages.”

“We put together a nice little routine using some of the traditional sailor mas movements (and) it was well received in terms of the people there, who were quite interested, and wanted to sign up, and I must say that since our presentation on Saturday, we have been getting a few more persons interested in playing with us for Carnival Monday and Tuesday,” Lastington remarked.

“There were a lot of patrons there to see us so that was good, and I think attendance was great compared to other years that I’ve been to the Traditional Mas Festival. So, I must commend the Spicemas Corporation (SMC) on that,” she added.