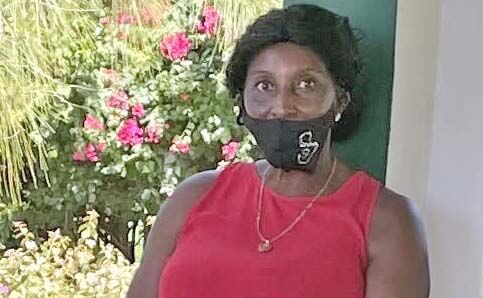 Craft and Spice vendor Sharmaine Ragbasingh has called for the New National Party (NNP) government of Prime Minister Keith Mitchell to fully compensate her for all the days that she will not be allowed to sell from her booth at the Grand Anse Vendors Market when ships visit during the 2021-2022 cruise ship season due to her vaccination status.

Ragbasingh is one (1) in about 11 unvaccinated vendors, who were barred from accessing their booths last week Tuesday (November 23) but were allowed only the day before to renew the license that is required to operate during the highly anticipated season, which recommenced last month, after a 20-month hiatus attributed to the coronavirus pandemic.

The aggrieved vendor issued her call for compensation in an exclusive interview with THE NEW TODAY on Monday, in which she contended that she has already paid her rent to operate from her booth and that the authorities should not have renewed her license for a fee of EC$35.00 last week Monday if they knew she would not be allowed to operate.

According to Ragbasingh, she paid a full year’s rent to operate from her booth during 2019- 2020 but she was unable to conduct business as normal last year due to the complete shutdown of the industry.

“There were no cruise ships … (but) I already paid my money for the booth…So, this year, they renewed my license for me to do my business as normal (and) now that the cruise ships are coming in, you lock me out, and I cannot sell. So, how am I going to make money to pay my rent, to do other things that I have to do,” she told THE NEW TODAY.

“What I want is for them to compensate me for all the days that the cruise ships come and I am not allowed to sell because that is the reason why they issued the license,” she said.

Ragbasingh made the comments from inside the gazebo just passed the main entrance to the Botanical Gardens, Tanteen, where she turned up to support unvaccinated hospitality sector workers, some who have also called for compensation for their years of service after being “wrongfully dismissed” from their jobs due to their unvaccinated status.

Prime Minister Mitchell has voiced opposition to mandatory vaccination but his regime has declared that workers in the tourism sector need to take the jab.

According to civil rights activist Earl Maitland, who was chosen by the vendors to represent their interest, and was also the organiser of Monday’s event, nine (9) hospitality sector workers have filed complaints, in accordance with Sections 80 and 84 of the Employment Act of Grenada on Monday.

However, he noted that “some were turned away by police officers,” who guarded the entrance of the Botanical Gardens throughout the day’s event.

Brendon Charles, who is a former landscaper at Sandals Resort in the south of the island was sent home in June because he refused to take the vaccine, has now reverted to farming to support himself.

In an interview with THE NEW TODAY, the St. John resident argued that the government’s vaccine mandate is “unconstitutional and expressed the view that the system has “failed the youth” and questioned the motive of the government in its attempt to “force persons to take a vaccine”.

“They want to force it on you and according to the Constitution this is illegal,” Charles declared.

Unvaccinated Lisa Modeste is a former Sandals Grenada employee, who spoke with THE NEW TODAY minutes before walking up to the Ministerial Complex to file her complaint.

She expressed hope that something can be done to address this issue.

“We are hoping that they can do something for us…I mean before we used to get tested every week or every two (2) weeks. So, I think that would be fair enough. Give us an option because it is not to say that we don’t want to work, we are willing to work,” she remarked.

Also among those who filed complaints at the Labour Ministry on Monday was Sheree’ Cruickshank, who called for payment for her years of service after being dismissed from her job at the Radisson Grenada Beach Resort, where she was employed for close to a decade.

“Something has to be done,” she declared.

Maitland, who confirmed that plans to assist workers in filing complaints will continue next week Monday, said moves are afoot to advocate on the issue of compensation, citing several parts of the Grenada Constitution, which he believes are being contravened by the government’s actions.

He made particular reference to Chapter One (1), Section One (1) of the Constitution, which speaks to the protection of fundamental rights and freedoms.

This includes life, liberty, security of the person, and the protection of the law, freedom of conscience, expression and assembly and association as well as protection for the privacy of home and other property and from deprivation of property without compensation.

These also include the right to work and Section 13 (1), which states that “Subject to the provisions of subsections (4), (5) and (7) of this section, no law shall make any provision that is discriminatory either of itself or in its effect.