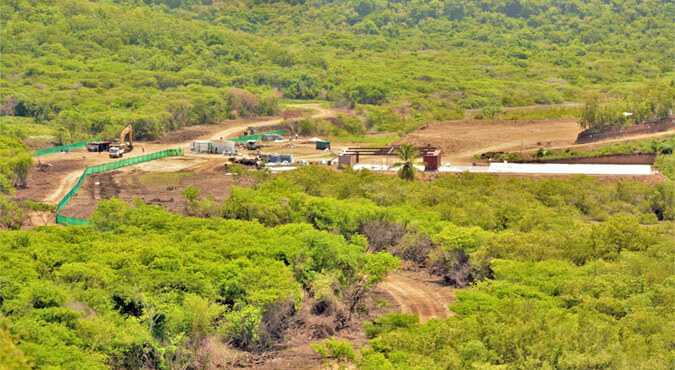 The Chinese investors who started a billion dollar hotel development complex known as the Mt. Hartman Resort in the south of the island have scrapped the plan and are now looking to build a modern Science and Technology university and state-of-the-art hospital on the same location.

A source close to the developers told THE NEW TODAY that the new plan is currently before the Physical Planning Unit (PPU) of the Ministry of Finance for its final approval but work is already taking place on the project site.

The Chinese had initially announced that they would be spending US$2 billion on the initial luxury hotel project planned for the project site covering over 270 acres of prime real estate land on the island.

The source said that the university would seek to attract international students from around the world and will not compete with the U.S-owned St. George’s University (SGU) which has been operating on the island since 1976.

“It will be offering Bachelor’s to PhD degrees in Science and Technology,” he said.

According to the source, the Chinese would build a hotel as part of the new development proposed for Mt. Hartman.

“There would also be a modern state-of-the-art hospital that would be developed on the property as well. That hospital will be doing not only Emergency care up to major surgeries,” he said.

The source said that the hospital will not only serve students and their family members at the Chinese-run university but also locals in need of medical care.

In addition, he said the site will also include an area covering over 100 acres of a Dove Sanctuary “for ensuring the safety and productive reproduction of the Grenada Dove and other indigenous bird species in that part of Grenada.”

THE NEW TODAY was told that over US$1 million “has already been dedicated for that bird sanctuary”.

The source said that the plan of the Chinese is to develop the resort based on “current state environmental procedures” although he acknowledged that Grenada “does not have any regulation with respect to Environmental Law – what we have is draft legislation”.

However, he said that PPU requires an Environmental Impact Assessment (EIA) study to be done for the change in design for the project and that a draft has been submitted by the Chinese investors.

“It is awaiting comment and thereafter it will be submitted for final approval by the Planning Authority,” he added.

He went on to say: “Every stage of this development has been supervised by an Environmental expert that has been retained by Grenada Resorts from Stage Zero right up to completion.

THE NEW TODAY understands that the environmental work is being done by Dr. Valma Jessamy who heads Jessamy Environmental Consultancy & Research Caribbean Incorporated.

The source said that he expected the Impact Assessment study to be available for public scrutiny within the next 30 days for the latest.

There are reports that Hong Kong-based movie actor and film producer Jackie Chan is one of the investors involved in the new Mt. Hartman project with China Harbour identified as the construction company engaged to build the facility.

The source said that the Chinese are planning to complete the project in a 2 to 3 year period and that “significant” work has already been done on the project site.

The developers of the Mt. Hartman Resort attracted national attention in September when the operators of a nearby quarry filed a complaint with South St George Police Station about alleged theft of their boulders by the Chinese.

The Royal Grenada Police Force (RGPF) did visit the two sides but reportedly took no action, prompting speculation in some quarters that Grenadian authorities did not want to anger the Chinese who are now providing the bulk of assistance to the beleaguered island.