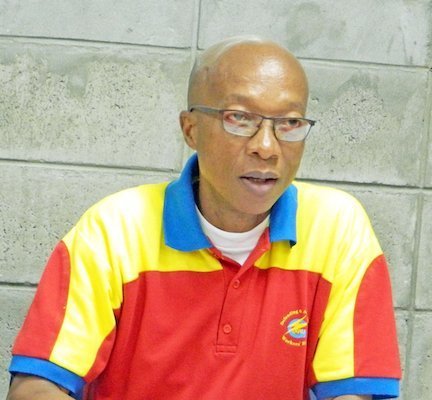 TAWU President Sen. Andre Lewis - was not pleased with some of the wording in the new agreement

Although two public sector trade unions have accepted the 4% salary and wage increase for their members for the 3-year cycle (2020, 2021 and 2022), union officials on Monday refused to sign onto the document to cement the agreement reached with the Government Negotiating Team (GNT).

The union leaders had concerns with the wording of the document, which they had only received minutes before the signing was expected to take place at the Cabinet Room within the Ministerial Complex.

The signing ceremony was fixed for 8.30 a.m but THE NEW TODAY was on hand to witness a female employee at the Prime Minister’s Office presenting the document to the union officials for the first time for signing at about 8.45 a.m.

The union leaders requested time to peruse the 2-page document and after spending about half an hour discussing among themselves, indicated to the GNT that they were ready to engage them in the discussions.

Another half hour passed before a female employee emerged from the room indicating that the signing was adjourned to Friday but she did not provide any reason.

In an interview with THE NEW TODAY shortly after exiting the Cabinet room, President of the Technical and Allied Workers Union (TAWU) Senator Andre Lewis said that the issue arose after they perused the document but did not give any specifics.

“In perusing the document, which we saw for the very first time this morning, we found that there were some issues that needed to be addressed and we raised those concerns with the Government Negotiating Team and they have to get back to us on this matter. So, we have set a date tentatively for Friday.

“Our members have accepted the 4%, 4%, 4% and we have to ensure that the document we are signing properly reflects what we have discussed and where we want to go.

President of the Public Workers Union (PWU), Rachel Roberts reiterated the sentiments expressed by Sen. Lewis noting that the document is usually given to them before hand so that they can review it.

She said: “Normally, we would want to peruse the document before hand to ensure that what we are signing really represents the spirit of the agreement that we would want for our membership – so the document has some issues that we would want cleared up and we have indicated to the GNT what those are and we look forward to seeing them corrected accordingly so that we can have a smooth signing on Friday.

The PWU President also pointed out that even though the members of her union accepted the 4% increase “they felt that 4% really did not represent a meaningful increase for them”.

“The workers indicated that while they are not happy with the 4% they were willing to accept it because it really took them back to the position that they would (have been) in 2020. It just normalise their salary, it did not add any value to it really,” she declared.

The unions have not made public their proposals, but following the first round of talks in September, the government issued a statement indicating that it had “reiterated that fiscal prudence remains a priority and as such, it is paramount that the public sector wage bill be fiscally affordable and sustainable”.

Shortly after assuming the position as Head of the Government Negotiating Team last October, Government Minister, Oliver Joseph declared a deadlock in negotiations with the unions on the issue of salary and wage increases.

Joseph said then that the unions’ request for a near 25% increase in wages will overturn all of the sacrifices made by the country to achieve fiscal stability and economic growth following a Structural Adjustment Programme (SAP).

He charged that if government agrees to the proposals submitted by the unions, millions of dollars in grants and concessionary loans, currently secured by Grenada would be extinguished, programs of house repair and training programs for the youth and labour assistance to farmers would have to be cut and also significantly reduce the assistance government provides to homes for the elderly.