Cato remains in charge of GCNA

Clouden cautions against the coronavirus bill

Battle for control of GCNA Board of Directors

GUT speaks out on COVID-19 Bill 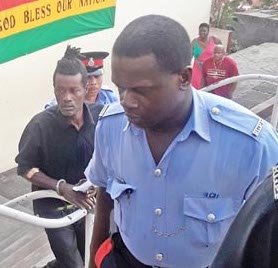 Police have arrested the two persons suspected of committing murder in separate incidents in the parishes of St. George and St. Mark within a matter of three days.

Law enforcement officers have arrested and charged a 47 year-old man for the horrific murder of his aunt, Patricia Honore, 68, who was found dead last week Thursday, face down inside of a barrel inside the downstairs of a two story house at River Road, St. George, where sources said they both resided.

The murder accused has been identified as Keith Pierre, who appeared before Acting Chief Magistrate Teddy St. Louis at the St. George’s No. 1 Magistrate’s Court on Tuesday on a Non-Capital Murder charge in connection with the death of the elder woman.

Pierre, who has retained the services of American-trained Attorney Jerry Edwin, used his hands to cover his face as he was escorted from the prison bus to the holding area at the court.

“Why you hiding your face Keith?” shouted outraged individuals who flocked the compound as he made his first appearance before the court.

The body of the woman was discovered by her only son, Ken Charles, last week Thursday night just after 8.00 p.m.

The grieving son, who was notably shocked by the turn of events, told reporters that his mother was a very loving person.

“My mother was very loving. I never disrespect my mom. My mother was good to me. I don’t know why he did this to my mom…I was looking for my mom…and when I opened the barrel, I saw two blocks…and I saw my mother’s foot in the barrel. So, I pulled the barrel but she was already gone,” he said sobbingly.

The grief-stricken son dispelled rumours circulating in the country that his now deceased mother was decapitated.

Non-capital Murder is an indictable offence and is not bailable at the level of the Magistracy.

The death of the 68-year-old woman was the third to be recorded on the island for the month of January.

Last week Thursday, 31-year-old Randy Bartholomew of Waltham, St. Mark made his first appearance before Magistrate Francine Foster, on an indictable charge of Non-Capital Murder in connection with the death of 41-year-old Christopher Carlyle Grant.

Grant, a well-known boat repairman and baluster manufacturer, reportedly died while being rushed to the St. George’s General Hospital after being stabbed with a knife last week Monday night allegedly at the hands of Bartholomew.

In what has been described as a sad twist of fate, Grant’s fatal stabbing occurred just after 10.00 p.m. at a happy hour event, following the funeral and burial of a beloved villager.

Grant’s alleged killer, Bartholomew, is said to be the brother of the island’s 400 metres world class athlete, Rondell Bartholomew.

The murder accused man was remanded to the Richmond Hill Prison by Magistrate Foster until February 18, when he is scheduled to appear for ‘mention’ at the St. George’s No.1 Magistrate’s Court.

Individuals, who flocked the outskirts of the Victoria Magistrate’s Court uttered a number of unpleasant remarks at the local media as they attempted to capture footage of those who began wailing as police officers opened the gate to allow the police vehicle to exit the compound, with Bartholomew handcuffed and in the back seat of their vehicle.

Sources told THE NEW TODAY that Bartholomew has maintained his innocence in the killing although he was picked up as a main suspect by police investigators.

Bartholomew’s parents, who were among individuals spotted on the court compound did not wish to comment on the incident.

However, in an interview with reporters, the common law wife of an uncle of the deceased, Roylyn Pierre, said she was “shocked” when she learned that Grant was killed.

Pierre told reporters that, she did not know Grant to be a violent person.

“I never (used to) see him, like to say, even talk too loud to anybody…I know him to be an outgoing person, (if) he know you (he would) say hi and bye and he (will) go his way but if you and him are close he will sit down and talk and thing,” she added.

Pierre confirmed that the deceased was the father of three children and the only son born to his now grieving mother.

Bartholomew is scheduled to reappear before Magistrate Foster at the Victoria Magistrate’s Court on March 5.

The first murder in Grenada for 2020 was the January 12 shooting death of Lennisha Stafford, a former student of Mac Donald College in St. Patrick who allegedly died at the hands of her suspected lover, Kyron Chitan of Carrierre in St. Andrew.