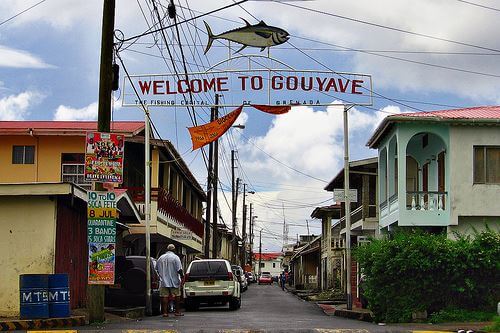 A senior member of the Royal Grenada Police Force (RGPF) has blamed former Commissioners, the late Fitzroy Bedeau and Winston James for helping to promote the growing unruly behaviour by some persons in Gouyave.

The policeman who spoke on condition that he was not identified made the charge against the backdrop of a clash last night in Gouyave between members of the Security Forces and some residents who took to partying in the streets after the start of the 8.00 p.m. to 5.a.m. curfew to tackle the Covid-19 situation in the country.

According to the officer, the lawlessness started with Bedeau who was the first chief cop to give approval to requests made by certain sections of the population in Grenada’s largest fishing town to engage in carnival-type activities outside of the annual festival in August.

He said the policy was continued by James who like Bedeau is from the parish of St. John.

He stated that after Bedeau left the force, these events were given the greenlight “heavily” by James as head of RGPF.

“Every time they ask for a jump up, he (James) say grant them,” said the police officer who hinted that the police force was now reaping the seeds that it helped to plant years ago.

THE NEW TODAY received reports that gunshots were reportedly fired by police in Gouyave on Saturday night as they moved in to disperse a mass gathering in the notorious ‘Lance’ area.

According to reports, a large crowd were liming in the streets beyond the 8.00 p.m. curfew now in force in Grenada when the police moved in and were met with resistance.

One witness said the crowd was in a festive mood, with music and drinking when the police showed up and several residents responded by throwing stones and bottles at the lawmen.

The Community Relations Department (CRD) of the Police Force has confirmed the attack on the police but details about arrests and specific police action taken could not be confirmed.

“I hear gunshot ringing like cell phone,” one person said to THE NEW TODAY.

The rioting was eventually quelled and the police put up a roadblock to restrict movement.

The rioting in Gouyave is said to have stretched the Police manpower to effectively put up road blocks at security check points last night to supervise the curfew which runs for 14-days.

A well-placed source said that some police officers from Gouyave who had to be part of the road blocks were forced to remain on base to help keep the peace for the night.

This is the second time this year that rioting has broken out in Gouyave with clashes between lawmen and civilians.

Earlier this year when a popular footballer in Gouyave was shot by police, people took to the streets, blocked roads and threw missiles.

Grenada has been under a State of Emergency for the past six days with a nightly 9-hour curfew making the traditional holiday festivities illegal.

The measure was put in place as the government desperately tries to stem the spread of COVID-19 in Grenada, following the discovery of a cluster about three weeks ago.

The number of positive cases has been climbing rapidly and there are now 66 active cases confirmed, in just three weeks.

Based on reports, the deadly virus has shown up in almost every parish since the discovery of the cluster which has been linked to the government’s ‘hospitality corridor’ which exempts three hotels from testing and quarantine protocols which are in place for all others.

On December 22, Prime Minister Dr. Keith Mitchell announced the State of Emergency and informed the nation that authority to make and implement regulations had been transferred to the Cabinet of Ministers.

However, people have continued to defy the government orders and there have been several reports of people violating the curfew and regulations which prohibit mass gatherings.

The legitimacy of the State of Emergency and the powers granted to the Cabinet is also being questioned by civil activists on the grounds that the Grenada Constitution does not give Law making powers to the Cabinet.