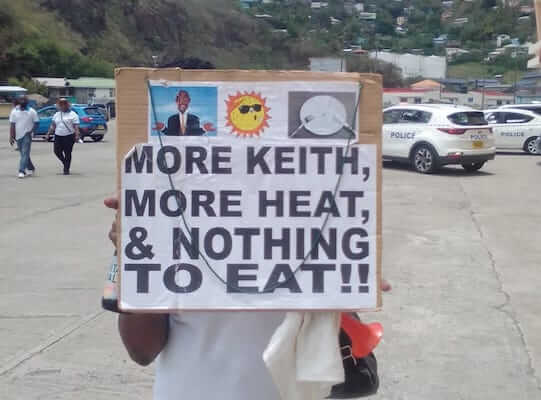 A worker showcased her placard on Labour Day

President of the Grenada Trade Union Council (GTUC), Andre Lewis has added his voice in condemning the use of the military under the Keith Mitchell-led New National Party (NNP) government to try and intimidate teachers and other public sector employees engaged in a battle with the state on the non-payment of an agreed 4% increase in salaries.

Yesterday, the President of the Grenada Union of Teachers (GUT), Jude Bartholomew expressed fears that Grenada was being turned into a “Military State” with the use of the Royal Grenada Police Force (RGPF) under the command of Edvin Martin in the dispute between workers and the administration.

Hundreds of police officers including members of the crack paramilitary Special Services Unit (SSU) at Point Salines were deployed in massive numbers in the city as the nation’s teachers staged a peaceful protest march on Friday calling on the government to honour its commitment to pay the money as agreed at the end of January.

Lewis told a small gathering of workers at the national sporting stadium at Queen’s Park on Labour Day that the Mitchell government is making a deliberate and determined effort to try and destroy the labour movement in the country.

He said the interrogation of Bartholomew one week ago by the police for alleged breaches of Covid-19 Social Distancing protocol during the 4% street marches in recent days is part of this unfolding plot by those wielding State power.

The TUC boss pointed to the massive show of force by the police at yesterday’s peaceful demonstration as another manifestation of the clear intention of government to use the coercive arm of the state against teachers and public officers.

“The NNP government has resorted to the coercive arm of the State to try to intimidate and to try and put fear in the hearts of teachers and the wider public sector,” he said.

Labour Minister Peter David who was on the platform for the celebration was seen often turning to his Labour Commissioner Cyrus Griffith and engaging in some kind of a conversation as Lewis who is also the President-General of the Technical & Allied Workers Union (TAWU) tore into the NNP regime which was labelled as the most anti-worker government to run the island.

According to Lewis, the massive show of force by the police on Friday was not by chance and was clearly not designed or intended to offer protection to the protestors during the march but was sent there “to send a clear message” to the rest of the Grenadian population including the youth movement and all those who are opposed to what is happening in the country, and those who have been calling for resistance to the rule of the NNP regime.

Lewis who is the labour representative in the Upper House of Parliament stressed that in the normal course of demonstration in the country, members of the public who would line the streets to give support, will often join in the march at some stage but it was a vastly different situation on Friday.

He said: “Yesterday that didn’t happen because the Police Force was ever present with their physiological impact. Those who understand military strategy will understand that – we understand that. Comrades, this is not just an attack on the Grenada Union of Teachers, this is designed to send shockwaves.

“There were no criminals in the march yesterday but in full force the military was there – members of the SSU, Rapid Response Unit, men with side-arms were there, truckloads of SSU in their para-military fatigue. This is designed as a military response – it is a message to tell (something to) the workers who are using their democratic powers to speak out.”

Sen. Lewis used the Labour Day celebration to send a message to PM Mitchell and his government that the workers will not be intimidated by their attempt to use the military to quell the street marches.

His reference to occupation is the one year that U.S troops remained on Grenadian soil after the October 25, 1983 military intervention of the island to put down a bloody military junta that had seized power six days earlier in a coup in which Marxist Prime Minister Maurice Bishop was killed.

Sen. Lewis is a known supporter of former Deputy Prime Minister Bernard Coard who was widely regarded as the mastermind of the coup against Bishop who changed his mind on a decision taken by the then ruling New Jewel Movement (NJM) for Joint Leadership in the party.

The TUC boss warned the men and women in uniform to be wary of Prime Minister Mitchell because in his last pronouncement on the street protest a few days ago he was using language which seemed to suggest that he was trying to distance himself from the strong arm tactics of RGPF against the GUT President.

The NNP regime has maintained its position that it cannot pay teachers and public officers the promised 4% increase in salaries before December 30, 2021 due to a significant drop in revenue due to the impact of Covid-19 on the economy in the past year.