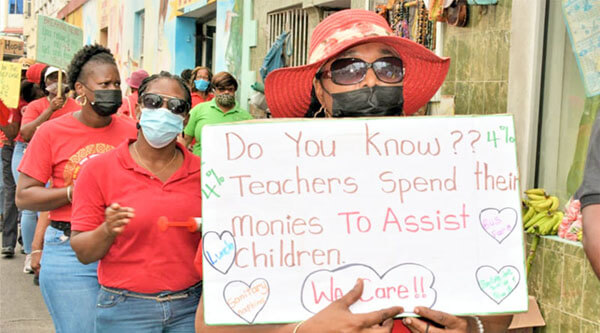 Teachers took to the streets in St. George’s to send a message on their 4% salary increase

General Secretary of the Grenada Trades Union Council (GTUC), Bert Patterson has launched a scathing attack on the Keith Mitchell-led New National Party (NNP) government, accusing it of using the labour movement in times of need but then discarding it when things improve in the country.

Patterson, who is associated with the Technical & Allied Workers Union (TAWU) took a shot at the government in delivering his report to the 15th Biennial convention of the Council held March 27 at the Public Workers Union (PWU) building at Tanteen.

In his report covering the period April 13, 2019 to March 27, 2021, the trade union leader pointed out that the so-called “Social Partners” grouping involving trade unions and other sectoral groups on the island that Prime Minister Mitchell had credited with helping Grenada through its Structural Adjustment Programme to deal with a crippling fiscal situation, is now dead.

“…The Social Partnership is literally dead and now the GOG (Government of Grenada) does not need any input directly from Labour or Private Sector official representatives and have instead chosen the route of huddling closely with some influential business persons and past and present labour leaders,” Patterson said in the report.

His reference to “past and present labour leaders” was directed at the current President of the Senate, Chester Humphrey, the now retired President General of TAWU who is seen in many quarters as a “behind the scene” figure in helping to shape government’s responses to industrial disputes with workers in the country.

Following are excerpts from the Bert Patterson report as obtained by THE NEW TODAY:

“The period since the last Convention of April 13, 2019 in particular the period between March 2020 and March 2021 has been the most traumatic in the lives of most of us living today.

Although some of us have had crises in the form of hurricanes, riots, war and recessions, none have affected the whole Nation in as many ways directly and for a longer initial period than the Covid-19 Pandemic.

It is the deepest economic crisis in our life-time, the longest curfew, the deepest job losses, the longest school closure, the greatest risk and fear of disease and we do not need to add more to this list not that there are not many more detriments to making the past year the worst of our lives.

We are still fortunate that we have not had multiple loss of lives directly due to the Pandemic. The GTUC however had an active and in our opinion productive term in particular with our education initiatives.

The first year of the Term (April 2019 to March 2020) the Government of Grenada (GOG) claimed its economy was the best performing in the OECS and even the Caribbean region. Several economists would have disagreed with this analogy as the Government based its boast on Gross Domestic Production (GDP) growth only.

It is important to note that in the Management Report of the 14th Convention it was reported that the earlier five (5) Conventions took place under conditions of recession or recovery from recession (2009-2019).

Immediately on the announcement of the Pandemic on March 11, 2020 the Government went into a cry of being the most vulnerable Government in the region. It has gotten to the point where they have refused to honour the wage agreements between themselves and the public sector unions and is in the process of launching a begging scheme aimed at local and diaspora citizens.

Related:  The financial situation of Grenlec “has deteriorated significantly” in recent months

All the major sectors have been disastrously affected, the worst being the Hotel, Restaurant, Tourism and Catering (HRTC) and their varied beneficiary industries to include Air Travel and Cruise Tourism.

It is claimed by some economists that we are in the worst recession in the last 100 years in that it is worldwide and driven by a public health disaster not just economic factors compared to past recessions.

With the roll out of the vaccination program there may be light at the end of what is expected to be a rather long tunnel and that is dependent on if Facebook, the Conspiracy Theorists and some of the Religious Leaders decide to change position and encourage or allow their followers to be vaccinated.

Recovery is totally dependent on the faith, what the virus decides or is allowed to do.

INDUSTRIAL CLIMATE
The Industrial Climate has not improved since our last Convention. It appears to be worse in the Public Sector than in the Private Sector.

Since the Government’s attainment of the second clean sweep of fifteen (15) seats in the 2018 elections, as reported at the last Convention, they immediately broke their agreement with the Public Sector Unions on the Pension and Gratuity matter.

During the initial period of the Covid-19 crisis, the Labour Movement was completely left out of any consultative role which did create some uncomfortable situations when the implementation of decisions made, involve workers.

GOG is at present in the thick of a dispute with the Public Sector Unions on non-payment of agreed increases for 2021. It is pointed that there is always money to do other activities but not to pay permanent workers their due.

The GOG found multi-millions to repurchase Grenlec shares and have employed even during the pandemic countless Traffic Wardens (or is it Charging Wardens).

GOG has just announced its new campaign program of free toilets for all. One will remember the year before the 2018 election it was free Lumber and Galvanise, before 2018 it was free windows now free toilets and there is no shortage of money for that.

In the Public and Private Sector, the Contract and other forms of precarious employment is on the rise and this has been stated as the most important threat to the labour movement so we cannot give in.

During the Lockdown period there were major disputes in the Private Sector on forced vacation, layoffs, unauthorised reductions in pay and working hours, schedule changes and nonpayment of severance pay.

There is a major unresolved dispute in one of our prime hotel properties, the Spice Island Beach Resort, involving its attempts to get rid of all the workers and not pay full severance. This matter has been reported to the IUF and if not settled can affect the Nation’s whole tourism plant when it again opens to the world.

Negotiations which for the last year were stagnated have now slowly restarted.

It is noted that the Social Partnership is literally dead and now the GOG does not need any input directly from Labour or Private Sector official representatives and have instead chosen the route of huddling closely with some influential business persons and past and present labour leaders.