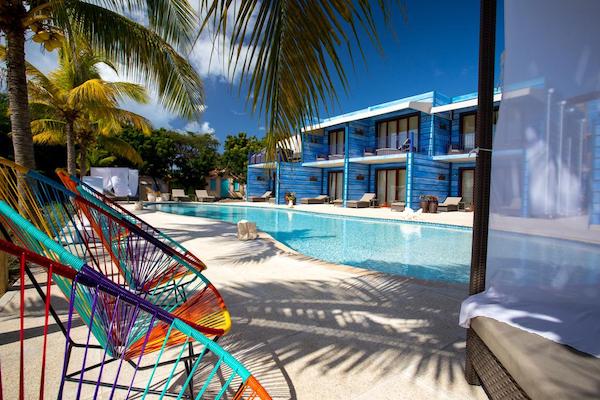 Staffers at True Blue Bay Resorts are angry with the ruling New National Party (NNP) government of Prime Minister Dr. Keith Mitchell for pulling out at the last minute on a deal that was reached with their Management to provide accommodation for the 19 returning cruise ship passengers on Carnival Princess.

A female worker called THE NEW TODAY on Sunday to accuse the government of taking out “bread” from her mouth by withdrawing from the arrangement at a time when the hotel sector is in need of money and reeling from the negative impact of the coronavirus pandemic.

She said that she was called out along with other workers by Management on Saturday night to turn up for work early the next morning to help prepare about 45 rooms on the request of government.

All returning cruise ship workers will be subjected to 14 days of mandatory quarantine in keeping with COVID-19 protocol.

According to the worker, the rooms were being prepared when the owner of the hotel, Russ Fielden came and stopped them from continuing on the grounds that government decided that it would no longer take the place at the last minute.

The female employee who was fuming mad said that the cruise ship workers were only minutes away from arriving at the resort when the order was given for them to stop cleaning the rooms.

She said it was the second time in the past four days that she had been notified to prepare to come out for work because the cruise ship workers will be accommodated at the resort.

She said: “One of the workers called me from the hotel (Saturday) night and said that she was called out to work right away to help prepare meals for the (cruise ship) workers who were brought to some other place – I heard that it was SGU in Grand Anse – because the workers were not happy with the food and they called on us to do something quick for them.

“It (the meals) were prepared and as far as I know everything was sent over to them (at SGU Campus). My God, you mean that after we came out to work to make a little dollar for our children in these hard times that the government would just take it back out from we mouth.

The worker praised the small hotel owner for the manner in which he has treated them over the years but insisted that she would like to be paid for her time in coming out to work to help prepare the place for the expected arrival at the resort of the cruise ship workers.

“I think that boss should send a bill to government and to demand payment for us as we spent a lot of time this morning in trying to prepare the rooms for the people”, she remarked.

“We went to work since 6.00 a.m. (Sunday morning) preparing rooms and was then told by the boss … there’s been a change of plans. Talk about incompetence,” said the angry and agitated worker.

THE NEW TODAY understands that it was a senior minister in the government who contacted True Blue Bay Resorts Saturday night requesting that the hotel make preparation to accommodate the 19 workers at the last minute.

True Blue Bay Resorts was among other small properties that the Mitchell-led government had approached in recent days on the issue of opening up their properties to provide accommodation for the returning cruise ship workers.

Among the persons said to be conducting the negotiations with the property owners were Health Minister Nicholas Steele, former Tourism Minister Brenda Hood, as well as the Acting Head of NaDMA, Superintendent of Police, Sylvan Mc Intyre.

The government has admitted that the cruise line, Carnival Princess did not live up to the promise to contribute towards the quarantine of the Grenadian crew who were brought back to the island on Saturday.

Government sources have said that the ship threatened to drop off the crew members in Barbados and the administration in St. George’s was left with no choice in the end than to accept them without getting any payments.